What Is Blue Trying to Do?

"What Is Blue Trying to Do?"

What is Blue trying to do?

"What Is Blue Trying to Do?" is the nineteenth episode of Blue's Clues from the second season. It was the thirty-ninth episode to be aired.

Steve and Blue teach the viewers some words of encouragement.

Blue went in the direction of the bedroom. Steve finds the first clue on a finished picture of Steve & Blue and draws it in his notebook. Slippery Soap blows 3 bubbles, but Slippery Soap blows the biggest bubble in the world. Steve finds the second clue on pencil and draws it in his notebook. Steve is trying to finish the puzzle, but it is Mailtime. The letter is about a boy playing basketball and a girl building blocks. Blue & Steve skiddoo into Baby Bear's room. Steve & Blue help Baby Bear find her picture in the living room. Blue & Steve skiddoo back home. Steve finds the third clue on Blue and draws it in his notebook. Steve goes to the thinking chair and is ready to put all 3 clues together. The clues are a finished picture of Steve & Blue, pencil, and Blue. The answer is write her name. After figuring out Blue's Clues, Blue writes her name with a pencil that said "BLUE". Steve & Blue get ready to finish the puzzle. It's a picture of the Blue's Clues House. Steve sings the So Long Song and the episode ends.

The train at the bottom of a hill,

Finished Picture of Steve and Blue 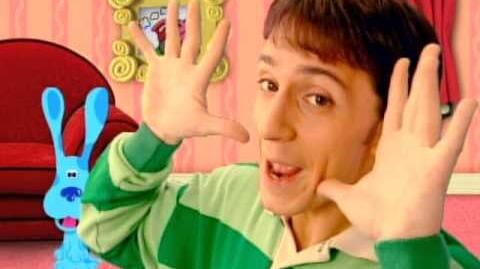