What Is Blue Afraid Of?

"What Is Blue Afraid Of?"

What Is Blue Afraid Of?

A Feather
A Shadow
A Sound (Hoo Hoo)

The Ghost of the Living Room
"What Is Blue Afraid Of?" is the eighteenth episode of Blue's Clues from the first season. It was the nineteenth episode aired in the United States.

"Blue is scared, and we play Blue's Clues to determine what's frightening her. As we search for clues, we investigate shadows and conceptualize what objects are making them, decipher extreme close-up photos taken by Mr. Salt and Mrs. Pepper, and label the source of scary sounds within a haunted house!"

Steve invites the viewers inside and says that he's looking for Blue, whom he finds under the blanket, shaking and whimpering because she's scared. They play Blue's Clues to figure out what Blue has a fear of. After the pawprint spookily disappears, Steve gets the notebook from Sidetable Drawer. Steve goes to the kitchen and a feather floats about on its own. Steve draws the first clue, a feather in his notebook. Soon after, Shovel and Pail were outside in the dark when Steve's shadow appears and he says "Bleh bleh bleh!", playfully scaring Shovel, Pail, and Blue. Shovel and Pail had shadows of their own, and so did Blue. They see a shadow of a tree and a birdbath.

Steve finds a clue on another shadow that was on a branch. When Steve isn't looking, the shadow disappears but Steve had to draw the second clue in his notebook. Then, Steve hears pots and pans banging and clattering, so he goes into the kitchen to see Mr. Salt and Mrs. Pepper. Steve asked them where Blue was, and she's nearby banging on the pots and pans like drums. After that, Mr. Salt showed Steve and Blue three photos that were taken up close. Every time Mrs. Pepper sees them, she gets in shock. They figured out that the up-close photos were different kinds of food.

The first one was a graham cracker, the second one was a raisin and the third one was celery. In the Mailtime segment, Mailbox tells Steve a knock-knock joke. After that, Mailbox gives Steve his letter, which Steve opens. The Video Letter segment featured three kids making shadow puppets. Soon after, Steve sees a ghost on the picture frame. Blue appears and was too scared to skidoo into a spooky haunted house alone. Steve suggests that he and Blue Skidoo together, and Blue happily agrees with the idea with Steve, along with a high five. After that, they look for the little ghost. They find him and told them his name was Boo. Whenever he hears his name, he gets startled. Suddenly, they heard a thump thump thump thump sound. It was the sound of footsteps.

A kitten came down the staircase. Soon after, Boo yells and his kitten scampers back up the steps. Then they heard a loud boom sound, and it turns out to be thunder. And then they hear banging. It was the sound of pots and pans. Boo's dad was making dinner for Boo in the kitchen. Boo thanks Steve and Blue what those so-called spooky sounds were. Blue and Steve skidoo back home. Immediately after that, Steve gets startled with the ringing sound, which turns out to be the telephone. Steve answers it and all he hears was a hooting sound, which has a pawprint on it, meaning it's a clue. Steve hangs up the phone and draws the third clue in his notebook.

After that, he goes to the thinking chair to put all three clues together. The clues were a feather, a shadow, and a hooting sound. Steve thought it was a shadow-dancing feather. That was not the right answer, and it's not even scary. The viewers thought it was an owl. Because an owl had feathers, its shadow matches the owl's shape and owl hoots. After figuring out Blue's Clues, Steve and Blue go into the bedroom to see the owl. Blue was still scared but after a matter of minutes, they introduced themselves and now Blue overcame her fear of owls. Mr. Salt, Mrs. Pepper, Shovel, Pail, and Boo came to see the owl. After that, Steve goes into the living room and sings the So Long Song and the episode ends.

Felt Friends Pretending to scare each other. 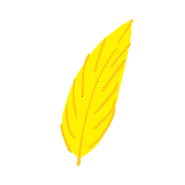 From the UK dub. 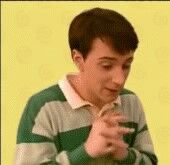 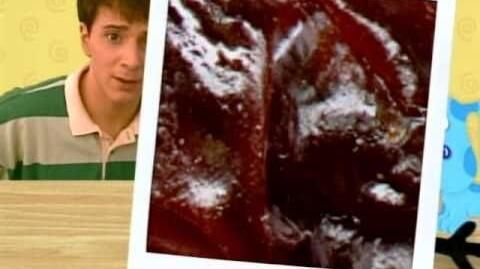