What Does Blue Want to Make?

"What Does Blue Want to Make?"

What Does Blue Want to Make?

Steve and Blue are making lots of crafts.

Steve and Blue invite the viewers into the Blue's Clues house. They were making newspaper hats. Blue wanted to make something else. They play a game of Blue's Clues to figure out what Blue wants to make. Steve gets his notebook from Sidetable Drawer and then he starts looking for the three clues. He found a very long strand of yarn and followed it to the kitchen table, where he sees a paw print at the end of the yarn line, meaning that the first clue is yarn. Steve and Blue then help Mr. Salt and Mrs. Pepper with a macaroni picture frame with a pattern sequence. Mailbox then came to deliver the mail. In the Video Letter segment, some kids were making newspaper hats too (Steve and Blue did that earlier). After that, Steve found the second clue on some buttons. Next, Steve helped the Felt Friends figure out what their masterpieces are. Afterward, he and Blue Skidoo into the bakery to help out Bowl and Spatula make Banana Cake. They gather the right ingredients to make banana cake. After that, Steve tried to skidoo back home and slips on a red sock (which was among the ingredients earlier) revealing a paw print on it. Steve then sees that the sock is the third clue and draws it in his notebook. Now Steve had to skidoo back home to put all the clues together. The clues were yarn, buttons, and a sock. Steve thought Blue wanted to button up the sock with yarn. But the answer was making a sock puppet. They make sock puppets by the craft table. Mr. Salt and Mrs. Pepper come by with their sock puppet, Steve sees that the Felt Friends are making a masterpiece of the sock puppet, and Bowl and Spatula arrive with the finished banana cake. After that, Steve and the sock puppet sing the So Long Song and the episode ends.

From the Portuguese version

Steve we got a letter with Newspaper hat Stamp

Ingredients to make of banana cake 🍰🍌

There clue on this sock 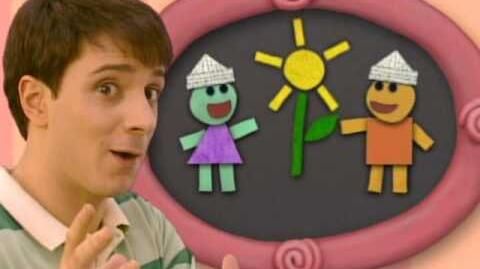