What Does Blue Want to Do with Her Picture?

"What Does Blue Want to Do with Her Picture?"

What does Blue want to do with her drawing?

A Stamp
An Envelope
Mailbox

Mail it (To Magenta)

"Blue's Birthday" (Produced/Credit Order)
"What Was Blue's Dream About?" (Released)

The Mailtime Mystery
"What Does Blue Want to Do with Her Picture?" is the tenth episode of Blue's Clues from the second season. It was the twenty-ninth episode to be aired/produced.

Steve and Blue show us some step by step features.

The episode starts with Steve forgetting to open the door for the viewers to come inside the house. After fixing that mistake, he explains that he and Blue were drawing a picture. Blue finishes outlining and now they had to color the picture. Once the picture was finished, Steve suggests that they can hang it on the refrigerator, but Blue refuses to do so. So, Steve asks Blue what she would like to do with their drawing. As a result, they play a game of Blue's Clues. First, Blue leaves a paw print on the screen. Steve sings to the viewers that they were going to play Blue's Clues. He then explains that Blue's paw-print will be on the clues, Blue's Clues that is. Steve had to clean the paw-print off. Steve decides to clean the paw-print using a spraying bottle of water and a sponge. Steve would have to spray water out of the bottle on the paw-print. Next, he takes the sponge and wipes off the drippy parts. With that out of the way, he was ready to play Blue's Clues. but then he remembered that he had to get his notebook from Sidetable Drawer. Sidetable Drawer opens up her drawer. Steve reaches in and grabs his notebook. He thanks her and now Steve is ready to play Blue's Clues.

Steve tells the viewers that to play Blue's Clues they had to find a paw-print because that is the first clue and then they had to put it in their notebook because they are Blue's Clues, they had to find another paw-print, that is the second clue, put it in their notebook because they are Blue's Clues. They had to find the last paw-print, that is the third clue, they put it in the notebook because they are Blue's Clues and they had to sit in the thinking chair and think. Steve reminds the viewers to keep their eyes out for the first clue but they had to figure out where Blue went. Blue went in the direction of the kitchen. Steve starts looking for the first clue. Steve finds the first clue on a stamp, a postage stamp to be specific. Steve asks the viewers what they had to do when they find a clue. The viewers tell him that he had to draw the first clue in his notebook. Steve draws the first clue, a stamp in his notebook. But Steve did not have enough info for figuring out what Blue wants to do with their drawing. Suddenly, Steve was asked to come to the kitchen. Mr. Salt and Mrs. Pepper saw a mystery maker in their kitchen. They saw the mystery maker making an ice cream cone but did not know who it was. Steve needed help to figure out who this so-called mystery ice cream cone maker is. Steve starts looking for evidence. There was a scooper, ice cream in a container, cones, and sprinkles. So, Steve kept in mind that the mystery maker made an ice cream cone.

Now, Steve had to find more of Blue's Clues. Steve immediately found the second clue on the envelope and draws it in his notebook. But Steve needed a little more info on what Blue wanted to do with their drawing. Steve saw a felt friend who was trying to get dressed all by himself. But he got a little bit uncomfortable. So, they did a step-by-step process and what the felt friend should put on his feet first. The felt friend had to put on both socks and then both shoes next. But now the felt friend had to figure out what to put on first. He had an undershirt on. He puts on the short-sleeved shirt. Next, he puts on a big long-sleeved fleecy shirt called a sweater. After that, he knows what to put on last-- which was the coat. Not long after that, Blue and Steve skidoo into the bakery to help Bowl and Spatula make muffins. Steve thought it was banana muffins which is what Bowl and Spatula were making but their recipe is all mixed up. They need to put the recipe cards in the right order. One card is baking the muffins, one card has a plate full of muffins, one card has the batter poured into a tin and one card has the ingredients mixed in the batter. The first step in making banana muffins is to mix the ingredients to make the batter. The next step is to pour the batter into a muffin tin. The third step is to bake the muffins and the fourth and final step is to serve the muffins on a platter. After putting the recipe cards in the right order, Bowl and Spatula got to work making the banana muffins. They mixed the ingredients. The ingredients were three bananas, two eggs, and one cup of flour. The ingredients get mixed. Next, they had to pour the batter into a muffin tin. Then, they had to bake the muffins. After they came out of the oven, steam escaped. The muffins needed to cool down. They get the platter ready for the banana muffins.

The banana muffins are now on the platter but Bowl and Spatula tell Steve that they cannot eat the muffins until after lunch. Bowl and Spatula thank Steve and Blue for helping them make banana muffins. Blue and Steve skidoo back home to find the third clue. Back at home, Mailbox was outside and there was a clue on him. Steve calls out to Mailbox saying he was a clue. Mailbox could not believe his eyes. Steve had to draw Mailbox in his notebook. Steve collected all three clues and he and the viewers were ready for the last step which is to go to the thinking chair and put all three clues together. Steve sits in the thinking chair and is ready to put all the clues together. The clues were a postage stamp, an envelope, and Mailbox. Steve thinks Blue should put the postage stamp on the front of the envelope and then they could fold their drawing so it fits inside the envelope. Then the viewers suggest that they put the envelope in Mailbox and that he could mail the drawing.

After figuring out Blue's Clues, Blue gets the envelope ready, folds the drawing, and puts the postage stamp on the top right corner. Then, Blue draws a picture of who is getting the letter which was Magenta. Steve and Blue had outside to see Mailbox who had a letter for him to mail to Magenta. Mailbox will make sure it gets delivered right away. Steve and Blue had back inside the house and waited. Mr. Salt, Mrs. Pepper, and Paprika asked Steve if there was still a mystery maker outside. Steve forgot to tell them that he and the viewers figured out who it was and it was Blue. The felt friend came back and this time he got dressed all by himself in the right way. Bowl and Spatula had the banana muffins served on the platter. After a short wait, it was Mailtime. Everybody joined in for the Mailtime song. Mailbox comes back. Steve sits in the thinking chair and Mailbox tells him that he did so deliver the letter to Magenta and that she sent a letter back to them. Steve was impressed. Steve and Blue get a letter from their friend Magenta. A boy named Adam Torkei tells Blue that Magenta got her the letter. and Diana Willner, Jennifer Willner, & Phil Worley Jr. had something for Steve and Blue. So, the 3 of them start to sing, "we got the picture from Steve and Blue". Phil Worley Jr. asks them, “What do you say”, and then they said "Thank you so much for sending it to us!" and Magenta licks them to say thank you for the picture. Steve thought maybe the viewers can send them mail one day. Steve sings the So Long Song and the episode ends. 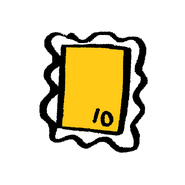 An Envelope with pawprint 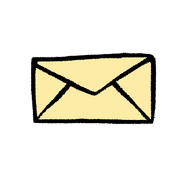 Hmmm, this outfit doesn't look comfortable on this felt person. 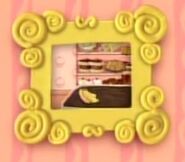 A clue on Mailbox 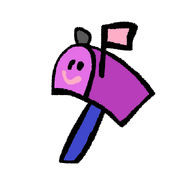 From the Portuguese dub

3 Clues from Step by Step

Blue's Clues What Does Blue Want To Do With Her Pi

What Does Blue Want To Do With Her Picture 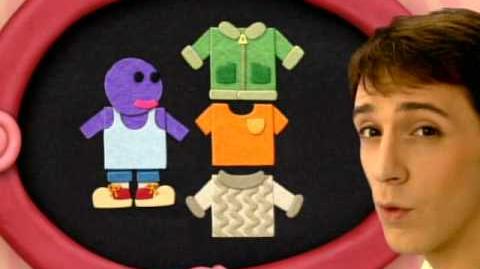