What Does Blue Want to Build?

"What Does Blue Want to Build?"

What Does Blue Want to Build?

A Flashlight
A Sheet
A Table

"Steve Gets the Sniffles"

Construction Sites
"What Does Blue Want to Build?" is the second episode of Blue's Clues from the second season. It was the twenty-first episode to be aired and the twenty-second to be produced.

Steve and Blue are building things without the use of hardware tools.

Steve and Blue have been building some things. Steve and Blue built a contraption with domino’s. Steve wondered if the ball would make the bell ring and it did. Steve wanted to build another but Blue wanted to build something else. Steve plays Blue’s Clues. To get rid of the paw print, he used a paper towel roll and an animal cracker box to make a Paw Print Scraper Upper De-paw print-capationing device. Then he cleaned the paw print off and got his notebook. After singing We Are Gonna Play Blue’s Clues, Sidetable Drawer called out to Steve and asked if he was forgetting something. Steve figured he wasn’t since he had his tool belt, Notebook, notebook paper and his hands but the Viewer saw the crayon wasn’t in the spiral. Steve went back to Sidetable Drawer to get the crayon. Instead he got a flashlight, which had the first clue. Steve drew the flashlight in his notebook but used the flashlight instead. Then he used his crayon, for real, to draw the flashlight. Steve didn’t know what Blue wanted to build with a flashlight. He thanked Sidetable Drawer and then went to the right to find more clues and to follow Blue. We find some popsicle sticks assembling themselves in various shapes and try to figure out what they are creating. The Popsicle Sticks were building. They built a ladder, an umbrella, and a truck. Then Steve heard Tickety Tock. Before he left, Steve said, “1, 2, 3, 4, 5, 6. See you later, Popsicle Sticks,” and went to Tickety Tock, who said, “1, 2, 3, 4, 5… uh,” the Viewer helped her out and said, “6.” Then Tickety continued and said, “6, 7, 8, 9. Look outside on the clothesline,”. Then Steve saw the second clue on a sheet. He drew it in the notebook. The first and second clue was a flashlight and a sheet but still Steve doesn’t know what Blue wants to build. We help out Shovel and Pail. First to measure their sandcastles and see which is taller, which is Shovel’s, and then to even them up. It was Mail time. Mailbox made a Mailbox Opener Upper Carrier Contraption and Steve had a Letter Getter Outer Contraption. Steve then sings We Just Got a Letter. Later we help a friend named Tink who was flung out of her contraption world to get back to where she belongs. In Tink’s contraption, she got help from Steve and Blue. The Contraption was big and Tink’s friend was below. They arrived to a big hole with a net. Tink thinks they should jump but Steve said it was too far. The Viewer said they should swing across. Steve saw a rope. So together, Steve, Blue, and Tink swung across the rope and made it to the other side. They then went down an elevator. Tink said that they have to go to the left. Then they arrived at another hole. Steve wondered what they have to do. The Viewer said they have to turn the wheel. Tink’s arms were too short too reach. Steve figured he can build something but before he could, Blue got a triangle stick and turned the wheel. Then they walked across the wheel like a bridge and went down another elevator. Then they saw the flinger below. Steve wondered what they should do now. The Viewer said they should push it down. Steve then said that if they push one end of the flinger down, the other end will go up. They needed something heavy. Blue then had two heavy squares stacked up and it was heavy enough to push down the flinger like a scale. Steve, Blue, and Tink went onto the flinger and it got more heavy than the other side and went down. Tink and her friend were soon reunited and they flung Steve and Blue out. As Steve walked along, the Viewer found the third clue on the snack table. Steve then tried to look but the table moved by itself, and again, and Steve looked and not looked a few times and then caught the table red handed. He then drew the table in his notebook. Then it was time to go to the Thinking Chair. The 3 clues were a flashlight, a sheet, and a table. Steve thought Blue wanted to put the flashlight in the sheet and do a little flashlight dance on the table. But that was not it. Steve then figured that Blue can put the sheet over the table take the flashlight and go under. The answer was a tent. Blue wanted to build a tent by putting the sheet over the table and take the flashlight and crawl under because it’s dark under there. Steve then sang We Just Figured Out Blue’s Clues and Blue put the sheet on the table with Sidetable Drawer, who had the flashlight. Then the Popsicle Sticks arrived and built a tent too. Then Shovel and Pail arrived and they were both even. Then Tink arrived and wondered if there were any flingers but luckily there weren’t any. Steve then sings the So Long Song and the episode ends. 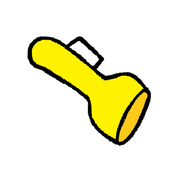 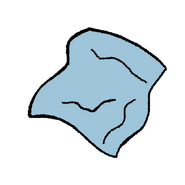 3 Clues from What Does Blue Want to Build? 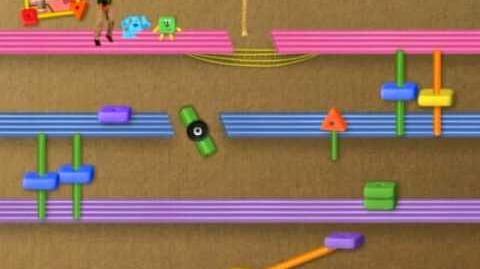