What Did Blue See?

"What Did Blue See?"

What Did Blue See?

What Game Does Blue Want to Learn?

Nurture!
"What Did Blue See?" is the sixteenth episode of Blue's Clues from Season 2. It was the thirty-sixth to be produced and aired.

Steve and Blue look at things from different points of view.

As Steve invites the viewers into the house, Steve was not there. Steve sticks his hand out and points to the ground. He has his knees on the ground. The viewers had to look down to see him and Steve had to look up to see the viewers. Now, the viewers get on their knees with Steve. And Steve decides to look even lower to the ground. The viewers did this too. Steve noticed that things look really different at ground level. The viewers turn their bodies around as they looked at the door at ground level. Suddenly, someone came in through the door flap. Steve wanted to know who came in that way. It was Blue. Blue started barking excitedly. She tells Steve that she saw something too. Steve asked Blue what she saw and Blue leaves a paw-print on the screen.

Steve thinks Blue wants him to play Blue's Clues to figure out what Blue saw. Because of the fact that Steve was looking at stuff, he interacts with the paw-print. The paw-print squeaks and hops. Steve gets out a mirror and the paw-print was amazed. Its reflection does what the Paw-print did. Steve explained that it was time to play Blue's Clues. Paw-print hops away and squeaks we are going to play Blue's Clues. After that, Steve goes to get his notebook from Sidetable. Steve goes up close to her and explained that he has come to get his notebook. Whoa goes Sidetable and noticed that Steve was up close. Sidetable opens up and the viewers get a close up look inside the drawer. Steve reaches in and grabs the notebook out of the drawer. Steve thanks Sidetable, and Sidetable says "You're welcome" and closes her drawer. Steve needed help trying to figure out what Blue saw. They sing the Blue's Clues demo tune and after that, Steve asks the viewers where Blue went. Blue's reflection appears as she went to the left. Steve said how did you see that and he realized that the viewers saw Blue's reflection in the mirror. Then, Steve started looking for those clues. The viewers pointed out a clue on the table. Steve saw the first clue and it was sticks. Steve picks up the sticks and he was amazed that the sticks looked different when they are seen through the water. Steve gets out his notebook and draws the first clue which was sticks. Steve needed more information on what Blue saw by finding two more clues.

Suddenly, it was Mail time. Steve and Blue sing the Mail Time song and Mailbox comes in through the window. As Mailbox opened his flap, Steve gets the kaleidoscope out and thought they got so much mail but it was really one letter through the kaleidoscope. Steve gets the letter and thanked Mailbox and he said "You're welcome" and left. Steve opens the letter and it was three boys trying to figure out what was under the green blanket. They saw something big and brown, a tail that is long and furry. They also saw something white and gold and was really soft. When they lifted the blanket together, it was a stuffed lion. Steve closes the letter and mentions that things look different depending on how you look at them. Suddenly, the computer turns on and a voice says Steve, Steve. He goes to Blue on the computer and saw that the voice was Squirrel. She went to Steve, Blue. Steve asked Squirrel "What's up" and Squirrel says "I need your help. Someone's calling me, but I don't know who." So, Blue skidoos into the computer to help out. Steve skidoos too. After that, Steve saw that Squirrel had a great playground.

It was either the caterpillar, the bee, or the inchworm. The viewers think the inchworm was under the bench and saw a big red flower. Steve and Squirrel had to get low to the grass to see the inchworm and they were right again. Steve and Squirrel looked at Inchworm's point of view and noticed that by looking under the bench, it was very different and the red flower looks very big from ground level. And then, a ladybug appears from behind the big red flower. After that, Steve and Squirrel heard another voice say yoo-hoo out loud. "What was that?" asked Steve. Squirrel says "It's coming from over here, come on." The inchworm gives a goodbye by moving its body side to side. Steve calls out and asks what it can see from where they are. The voice says I can see white flowers and some orange goldfish swimming all around. Steve and Squirrel heard that the mystery animal can see white flowers and goldfish swimming around. It was either the frog, the bird, or the duck. The viewers thought it was the bird on the bridge. Steve and Squirrel checked to be sure. And it was the bird and then Steve and Squirrel looked at Bird's point of view. As they looked, they saw the whole pond with water lilies and all those fish swimming around. And then, another voice goes yoo-hoo which caused Steve to shrug. The squirrel knew that voice and it was her mom calling out and has to go home. Steve says goodbye to Squirrel. After that, Steve saw that there was a clue on three eggs. Steve gets the notebook out and draws the third clue which is eggs. After drawing the third clue, Steve realized that whenever he says our third clue Steve has collected all three clues which meant that it was time to sit in the thinking chair. But in order to that, Steve and Blue had to skidoo out of the computer to get back home. They did so and Steve sits in the thinking chair. Now it was time for a clue review. Steve and the viewers have to figure out what Blue saw and the clues were sticks, a tree, and eggs. Steve wonders what Blue saw with sticks, a tree, and eggs.

Steve realizes that Blue had to be outside to see a tree and thought Blue would have to look up at the tree. Steve thinks that Blue probably saw a tree with sticks in it and also thought there could be eggs in the middle of sticks. Steve still wondered what Blue saw and asked the viewers what they thought Blue saw. The viewers believe Blue saw a bird's nest. Steve clarifies the answer to Blue and thought Blue was looking up at a tree and saw a nest made of sticks which eggs inside it. Steve and the viewers figured Blue's Clues. So, Steve wanted to see the nest Blue saw. Blue gets out and Steve says "wait for us". Steve opens the door and it closes behind him just as he got outside. Steve says is that it right there and Blue barks It is. Steve can see the eggs in the nest. Blue looks through the nest with the kaleidoscope. And then, they see Squirrel. Steve reviews to the viewers on how they figured out who yoo-hooed at them at the park. Suddenly, the eggs started moving and shaking, and then, one of the eggs broke and a baby bird pokes his head out from the eggshell. Steve and Blue go for a closer look. The remaining two eggs cracked and their eggshells broke and two more baby birds poke their heads out. Steve and Blue saw the baby birds. Steve figured out that Blue did so see the nest filled with eggs and they just hatched. Steve sings the So Long Song outside and as he continued, the mommy bird came to check on her babies. After that, Steve waves goodbye with the baby birds and the episode ends.

A close up interior look of Sidetable Drawer.

Books in a bookcase

Blue and her goldfish

There clue on this Tree

"So this tree must be our second clue."

"We need our Handy Dandy Kaleidoscope." Oops, that's an error 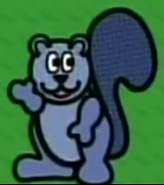 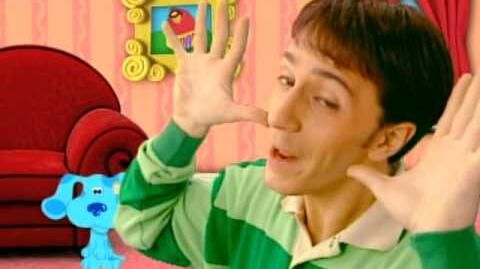