What does Blue hear?

Drops of Water
A Cloud
A Sound (Boom)

"Animal Behavior!" (Broadcast/Credit Order)
"Signs" (Production Order)
"What's That Sound?" is the 4th episode of Blue's Clues from Season 3. It was the 44th to be produced and aired.

In this episode, we listen carefully to hear all sorts of different sounds. We start out hearing a noise and identify it as wind chimes coming from outside. Later, we use noises to help Shovel and Pail follow a gopher to a neat-sounding stream. Later, we skidoo into a silent black and white movie to fix it up by adding sound effects to it.

As we head inside, we can hear some sort of ringing sound. Steve wants to know what it is and so we try to figure it out. We think maybe it could be a set of keys, but they just jingle, they are not the ringing that is heard. We finally find out that the noise is being made by some wind chimes. We play Blue's Clues to find out what it is. Soon, the first clue, drops of water are found. We then find Shovel and Pail outside, giggling. It turns out that a gopher has shown up and he is going to lead them to a stream that makes a pretty sound. We follow him by using sound clues. First, we hear the splashing of water, then the rustling of leaves, and also the gopher's giggling. After finally reaching the stream, we decide to go for a walk and listen to some of the sounds of nature, like a frog croaking and a cricket chirping. Soon, the second clue, a cloud is found. When mail time comes around, Mailbox and Steve make their favorite funny sounds. Later, we find Mr. Salt, Mrs. Pepper, and Paprika watching a movie. The problem is that it does not seem to have any sound and Mr. Salt is not able to fix it. So, we skidoo into the movie, a black and white silent film, and help Blue to use sound buttons to add in the proper sounds that go with the images on-screen. After the last clue, a sound button that makes a booming sound is found Steve sits in the Thinking Chair. The answer turns out to be a thunderstorm. Steve, Blue, Gopher, Shovel, Pail, Mr. Salt, Mrs. Pepper, and Paprika sit together and listen to the storm. Steve sings the So Long Song, and the episode ends with the sounds of the storm.

Turn off the faucet.

Mailtime Season 3 What That Sound

This scene is from the Nick Jr. Kids Closing (on some VHS recordings) 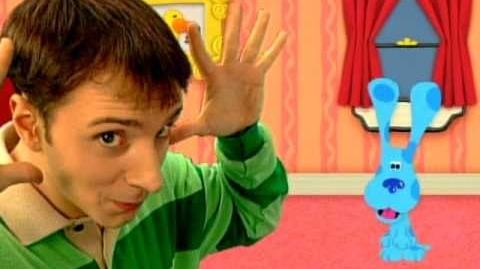