Laugh with Blue
"What's So Funny?" is the 20th episode of Blue's Clues from Season 3.

What's so funny? That is the question as Steve and Blue get silly.

The Blue's Clues House has become extremely silly today. Steve is more than happy to participate, by doing funny stuff such as putting a shoe on his head and his ear and trying to make Blue laugh. Sidetable joins in by first giving Steve a potato when he goes to get his notebook. We come across Shovel and Pail, who find that Gopher's popping up all over the backyard, although they are not sure exactly where he is going to show up next. We figure out that he pops up in predictable patterns. Later, we skidoo into Silly Town. Silly Town is a strange, mixed-up place. Looking around, we find everything from a banana being used as a hammer to a backwards park.

Steve is wearing his left shoe on his head

Steve thinks shoes should go on their ears

Steve got a potato instead of his notebook

Mailtime Season 3 What So Funny

Juggling from the UK dub

Juggling from As Pistas da Blue 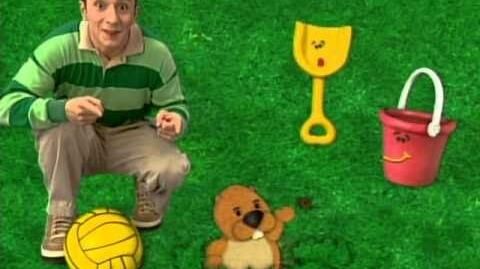