Where is the key to our trunk?

A Box
An Open Motion
A Melody

Blue’s Mystery Present
What's Inside is the 8th episode of Blue's Clues from season four.

The finding of a secret lost door gives us the opportunity to talk about things that are inside other things. For example, we play the Grocery Game with Mr. Salt and Mrs. Pepper. This involves placing various food items on shelves based on what's inside them. We also get to skidoo into a pull tab book, where we find many interesting things inside the tabs.

Steve welcomes us in. He's very excited, saying that he & Blue found something so amazing. It turns out that they've found a secret door. It's locked and we'll need a key to get into it. This whole secret door thing gets us exploring the concept of things that are inside other things. For example, Steve decides to take a look inside a piggy bank. He finds that there are coins inside. We get a call from Mrs. Pepper. It turns out that she, along with Paprika & Mr. Salt, wants us to play the Grocery Game. We're the guest contestants. The first round involves a shelf for things that have seeds. We're presented with lettuce, an apple, cottage cheese & milk. After thinking about it, we decide that the seeds are inside the apple. We're correct and are rewarded with an inside of the apple. We do again, and this time we look for things with red. We have a choice of a watermelon, mustard, a cucumber or a cantaloupe. None of these things are obviously red but Steve gets our help in figuring out that the watermelon has red inside. On the third and final shelf, we search for something with liquid inside. We have a choice of a box, bread, a carob pod, or coconut. Since this a hard one, we get to shake them. We hear a sloshing sound from the coconut and correctly choose that it's the item with liquid inside. In the Skidoo segment of this episode, we visit a pull tab book. Boris the bunny has asked for our help in finding his friend, Sammy the squirrel. We realize that perhaps Sammy is inside something. Pulling a tab reveals that Sammy lives inside a tree. Now that we've taken care of that, Sammy is thirsty and wants some juice. That's from an orange, orange juice, of course. We also check out some of the other tabs and find a nest of eggs in a tree and a hummingbird in a patch of flowers. Finally, we help out Boris, who is need of a snack after forgetting to bring one. He likes carrots and we pull a tab that reveals some growing under the tround. We also find a bird in another tree and some berries in a bush. And at the end we find the key in the music box to open the trunk. There was something inside. Blue opened the trunk with the key and there was Steve & Blue's Farm inside the trunk. Steve forgot that they put it in there. Boris opened the corrage. Paprkia opened the farm truck and there were horses inside. Steve sings the So Long Song and the episode ends. 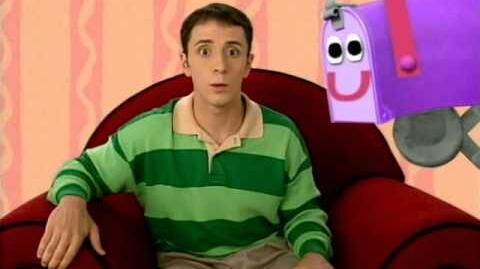