The Legend of the Blue Puppy

The Legend of the Blue Puppy

Love Day (Broadcast/Credit Order)
Soccer Practice (Production Order)
The Legend of the Blue Puppy is the first episode of Blue's Clues from season 6.

On a night with a blue moon filling the sky, a moon fairy named Moona appears outside the Blue's Clues house and tells Blue a story about her birth under a blue moon, with a key that will unlock her greatest gift. We follow Moona to find this key and once we have it, a great hunt all over the Blue's Clues house begins to find the lock that it fits. Once that's found, the key unlocks Blue's Room, a special playroom where she is able to talk. Here, Blue can meet lots of new friends, but the most important thing about it is that she can communicate orally. We take part in games such as Boogie Woogie, Dress Up Chest, Silly Seat, and Doodle Board.

Back to Blue's Clues House inside

Goof When You Go In Noggin Moonas Name Is Luna Bewhare

Blue's Clues book is in red instead of yellow

The Nick Jr logo at the end is presented in a dark red instead of the normal yellow. That and the book at the end the original yellow colour can be see faintly when fading in and out 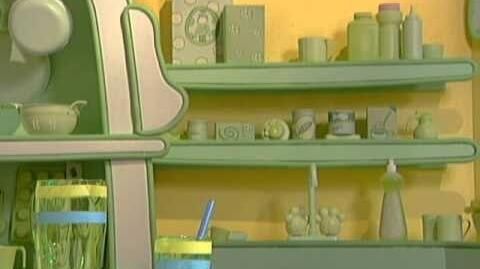