What does Blue want to do outside?

Dirt
A Watering Can
Seeds

"Blue Wants to Play a Game"

Growing with Blue
"The Grow Show" (working title: "What Does Blue Want to Do Outside?") is the thirteenth episode of Blue's Clues from the first season.

"We play Blue's Clues to figure out what Blue wants to do outside. As we look for clues, we stop to learn the process of where orange juice comes from Mr. Salt and Mrs. Pepper. Next, we investigate the elements of length and volume by comparing inchworms and puddles with Shovel and Pail. Finally, we categorize fruits and vegetables by where they grow with the Felt Friends."

Steve and Blue have been growing. They play a game of Blue's Clues to figure out what Blue wants to do outside. They get the notebook from Sidetable Drawer. He then finds the first clue on some dirt on some boots and draws it in his notebook. Not long after that, Steve and Blue help Mr. Salt and Mrs. Pepper figure out how to make orange juice and where it comes from. They find out that orange juice comes from oranges, which come from orange trees, which come from seeds: first, a seed is planted, and then an orange tree grows, an orange gets picked from the tree, gets squeezed, and the juice is poured into a cup. In summary, orange juice comes from an orange tree seed that is planted; and then, the seed grows into a full-grown orange tree; and then, orange is picked from the tree; and the juice is squeezed into a cup.

Mr. Salt and Mrs. Pepper also said that you can also get orange juice from a carton out of the fridge. After helping them out, Steve heads outside to find the second clue on the watering can. He draws it in his notebook. He heads back inside for Mail time and in the letter was a group of kids visiting a farm. After that, Steve and Blue help their felt friends, Fifi and Freddy, figure out where certain fruits and vegetables grow. They know that oranges grow on trees, potatoes grow underground, and grapes grow on vines. After they sing a song about it, they skidoo back home and Steve finds the third clue on some seeds on the table. Steve draws the third clue and sits in the thinking chair to put all the clues together.

Steve thought he should put the seeds and dirt in the watering can and mix them up. That answer was so silly it poured on his head. Steve thought he had better put the seeds in the dirt and use the watering can to water the seeds in the dirt. The answer to Blue's Clues is that Blue wanted to plant a garden. Steve and Blue went outside once more to do so after figuring out Blue's Clues. Blue had just dug a hole in the ground when Steve arrived with the watering can and one of the seeds, which he dropped into the hole. After Blue filled the hole back up and watered it, Steve says that if we give the seed plenty of water and sunshine, it will grow up to be a big, beautiful, blue sunflower. As he tells the viewers this, the seed does grow into a blue sunflower but tells us that this does not happen until later before shrinking back into the ground.

As Steve and Blue plant more seeds, Mr. Salt, Mrs. Pepper, Shovel, Pail, and the felt friends came over. Steve plants more seeds as he sings the So Long Song (which the other sunflowers moved to) and after Shovel digs a hole, Steve tosses a seed into it, Mr. Salt and Mrs. Pepper cover it up, and a small sunflower instantly grew. Everyone waves goodbye as the episode ends.

Notice you can see Steve's hair from later episodes 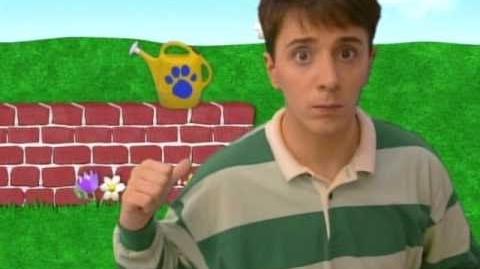