What should we put in the last alphabet box?

Joe and Blue are creating an alphabet train, with the help of their friends. They’re going to be boxes from A to Z connected to the train and each one will contain something to represent that letter. Joe and Blue help the characters throughout to figure out what they can put it the boxes and also help to make sure everything is in order. The skidoo trip takes them into a magnet board, where they find every more things for the boxes. Once the train was complete, they join in a song about the alphabet and objects.

This episode starts with Joe (in his Orange Shirt) saying hi to the viewers, and he said that they needed help today because there is making an alphabet train. First, there is the letter A, and we find an airplane that starts with A. Next, there is B and Blue comes to the letter B box. Then we help Tickety Tock sort out the C, D, and E boxes. A crayon starts with C, a drum starts with D, and an eagle starts with the letter E.

Then, we came to Sidetable Drawer for the notebook, and she has something for the letter F box, a fox. After Blue's Clues was explained, we start looking for clues. Then, there is a clue on a white spot.

Then we go to Pail for the G, H, and I boxes. The options were globe, pumpkin, ice cream, hat, or mittens. Respectively, G, H, and I are a globe, hat, and ice cream. We then hear Pail joke about the letter J and Joe found out that he was for the J box.

Then, Periwinkle had a leaf for the L box, a kite for the K box, and mittens for the M box (just like the ones we saw before). Joe sang the song to see, it goes "A B C D E F G H I J L K M" but it is wrong. K and L would trade places to be right.

Then, Tickety Tock had something for the N box, newspaper. Then Joe found another clue on a black spot. After the 2nd clue review, Maitlime commenced. And Mailbox founded something that starts with O, an oval. Then Joe got a letter.

After that, something that starts with P was found, Periwinkle and Pail.

Then Slippery Soap asked questions for Q and R with the answers being queen and rainbow. Then there was the S for Slippery Soup and T for Tickety Tock. Periwinkle brought a ukulele for the U box.

Then we see Joe and Blue skidooing to the Magnet Board, and then they were finding something for V, W, and X. Volcano came for the V box, the wagon was for the W box, and x-ray was for the X box. Then they see a Y. It made a yo-yo. Then there was a clue on the letter Z. Then after he wrote it down, it was time for the thinking chair, but Pail called Joe to put the yo-yo down. Joe then sits for the thinking chair review. The answer was a zebra.

Then, the train was finished, and Joe sings I'll Never Forget My Alphabet. After the song, the episode ends. 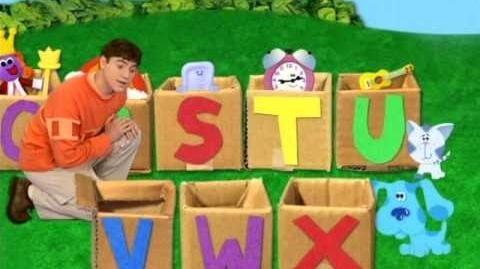