What does Blue want Steve to bring to college?

Can You Help? (Broadcast Order)
The Boat Float (Production Order)
The Big Book About Us (Credit Order)
Steve Goes to College is the 25th episode of Blue's Clues from season 4.

Only Seen in the Credits

Steve is going to college and he has to figure out who is going to watch over the Blue's Clues house when Steve is away.

In this episode, Joe plays Blue's Clues for the first time on his own with his new notebook to figure out what Blue wants to give to Steve when he goes away to college. The clues in this episode are numbers, buttons, and a ringing sound. The answer turns out to be a telephone. After Joe figures out Blue's Clues, Steve enjoys his surprise party. He then says goodbye to everyone and sings The So Long Song one last time before heading off on the bus to college. Later, Joe is settled in and he gets a phone call. It was from Steve. Steve said that he misses everyone, but tells then to have fun and to take care of Joe because Joe needs help sometimes, just like him.

"Thanks again for all your help."

Steve getting on the bus to college. 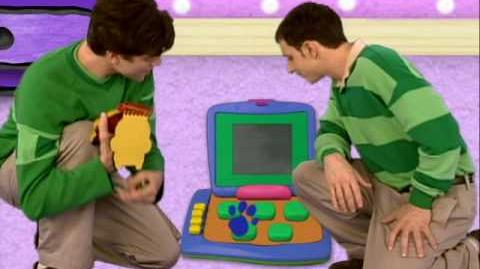