It's song time for Blue and Josh, but Josh try to figured it that Blue has a favorite song.

It was song time but Josh cannot figure out Blue's favorite song. They play a game of Blue's Clues to find out. Steve steps on the first clue, a duck, and draws it in his notebook. Later on, Josh and Blue try to find the right sounds for each musical instrument. Immediately after that, the phone rings. Josh answers it and it was the felt friends on the phone who had a song of their own. Josh tries it but messes up. He listens again. He gets it right and hangs up the phone. Josh sees the felt friends Fifi and Freddy.

They both sang Boom-ba-cha-cha-la-la boom-boom-bop. Josh sings along with them. Then it was mail time. Josh reads the letter. After that, Blue and Josh skidoo into a picture of a farm. Immediately after that, Josh finds the second clue, a barn and draws it in his notebook. Josh had two clues to what Blue's Favorite Song is which were a duck and a barn. Josh had to find the third clue to he can get more information. Josh and Blue saw some chicks who were putting on a song show. They were going to sing "Row, Row, Row Your Boat." They figure out the right verses and the right key for the song. Soon after, Blue and Josh skidoo back home. Not long after that, Josh hears the piano playing off-screen. Josh sees the third clue on a piano key. Josh touches the piano key that the little paw print was on.

After tapping the key it was on a few times, the paw print moves to different keys and Josh realized he just played a little tune that went "C-C-C, G, A-A, G". He draws the third clue in the notebook. He goes to the thinking chair to put all the clues together. Josh thought it was Rubber Ducky Had a Barn. But the answer was Old MacDonald Had a Farm. After figuring out Blue's Clues everybody (including the musical instruments, the felt friends, and the chicks) got together for song time. Blue was on piano and Josh was on guitar. They play the tune "Old MacDonald Had a Farm". Not long after that, Josh plays "The So Long Song" and the episode ends. 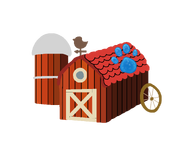 3 Clues From Song Time With Blue 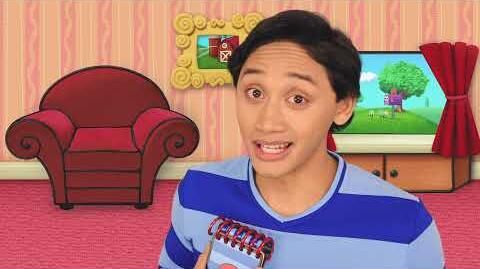