Something To Do Blue

Something to Do, Blue

What does Blue want to do today?

Books
A Lunchbox
A Chalkboard

Joe's First Day (Season Order)
Blue's Book Nook (Production Order)
The Legend of the Blue Puppy (Release Order)
Meet Blue's Baby Brother (Broadcast Order)
Blue's School (Credit Order)
Something to Do, Blue is the 14th episode from season 4. Originally planned to air on April 22, 2002. However, this and the previous episode were aired on TV in the United States on August 1, 2006, as towards the end of the sixth season and it is currently unknown why they aired late.

Blue cannot decide what to do today. Mr. Salt encourages Blue and Steve to pick a few items from around the house and use their imaginations to invent something new to do with them.

The episode begins with Steve trying to figure out what Blue wants to do. Mr. Salt overhears this and he and Mrs. Pepper tell them about the "Something To Do Stew". They just pick three things and make something new out of them. They give a sponge, paint, and paper. The viewer tells Steve sponge-painting. Steve paint with the sponge onto the paper. Mr. Salt and Mrs. Pepper clean up the things and go to put the paper on the fridge. Then the game begins after Steve asks Blue if she wanted to try out the "Something To Do Stew". 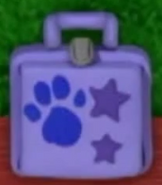 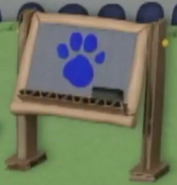 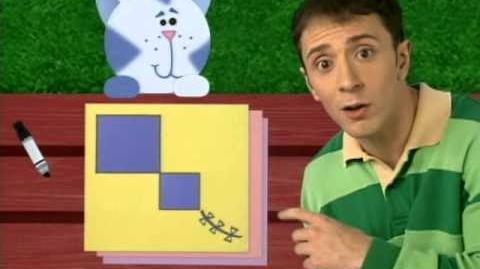