What could we do after soccer practice?

A Truck
A Cone
Circles

Blue and some friends learn how to play soccer professionally.

Joe leads the viewer to the park where Blue, Sidetable, and other characters are playing a game of soccer. Joe decides to play Blue's Clues in a unique way: every time someone scores a goal, they earn a clue. Joe is the coach and provides practical soccer tips about things such as how to avoid bumping into each other and not giving up. At Mailtime, Mailbox gives Joe a letter sent by soccer-playing children showing the viewer what real soccer looks like. Mailbox asks Joe if using your head in soccer is allowed. Joe tells Mailbox that you can use anything except your hands in soccer. Mailbox is relieved. The soccer game resumes. The players learn the importance of stretching and of sharing with our teammates. In Blue's Room, Blue and the viewer talk about soccer and have some fun playing a soccer drawing game with Doodle Board. 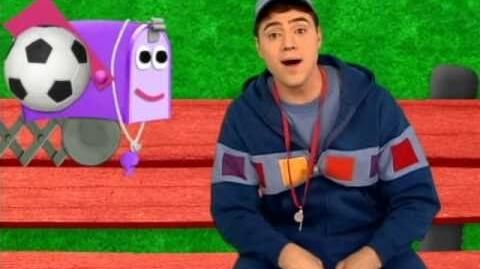