Nick Balaban
Snail is a supporting character on Blue's Clues and Blue's Clues & You!. She is a pink snail who makes three hidden appearances in each episode.

Snail is a snail who is often seen hiding around anywhere, whether around the Blue's Clues house, in the backyard, or even in a skidoo location. She rarely has any lines but appears 3 times in the background of each episode. When she does speak, her voice is shown to be surprisingly deep and loud. She is voiced by Nick Balaban (who also voiced Mr. Salt), one of the show's music composers.

Snail is designed to look like she is made of light pink molding clay. She has black antennae and a simple face consisting of a pair of tiny black eyes and a smiling black mouth. Her shell is swirled on the inside.

In Blue's Clues & You!, her body and head are positioned more horizontally and her shell is more angular at the top and bottom and a darker shade of pink. Her mouth is now smaller and red and her eyes are more ovular with white highlights. She now has a pair of black eyebrows as well.

Snail appears at least 3 times in every episode of the original Blue's Clues series and in "Meet Blue's Baby Brother". Click here to see all of her appearances.

The following Blue's Clues & You! episodes feature Snail in more than just a background role: 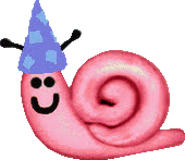