Joe and Blue created Wacky Wild World and skidoo their way in! But when the picture of home (required to skidoo back home) goes flying off, Joe and Blue go on an adventure to reclaim it. To do this, the magic wand is needed to collect for magic letters "H", "O", "M", and "E" respectively.

When Joe greets the viewers today, he shows them his and Blue's creation, a giant craft project called Wacky Wild World. They skidoo in the project, but the picture of home blows away. Joe and Blue set off to find four magic letters throughout the world to get them home. They figure out what to use to cross a river, help blow on a bubble to get Joe and Blue across a pit, figure out what to use to reach a letter that resides on the moon, and make a magic carpet float by clapping. Once they have found all the letters, they chant the magic word, bringing the picture of home to them and skidooing back home. Then, in Blue's Room, Blue and her friends sing an interactive song about home. 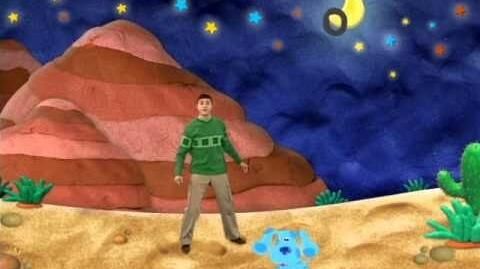