Where does Blue want to eat her snack?

A Green Light
A Door with an Arrow
A Table

Blue is trying to tell Steve something and in order to tell him, she decides to use a sign. It turns out that signs are all around us, in fact, Blue's Clues is a game of signs in away. They help out Pail when Shovel posts signs to help find him. They learn all about "don't" signs as well as signs that give directions for locations. They even skidoo and find a girl named Carly who is telling a story in sign language (because she's deaf) and they help Steve with some of the signs that he is having trouble figuring out.

Steve welcomes the viewers into the house and needed help in figuring out what Blue is doing. Blue was telling Steve to come on in sign language. Blue makes a sign for her name by turning her paw side to side. Blue shows Steve a picture of a fork, a plate, and a spoon. Blue was telling Steve that she wanted to eat a snack. Steve was hungry for a snack too. Blue did not want to go to the snack table because she shows Steve the picnic table but had a red circle with a red diagonal line through it which meant "Don't". Blue decides that they should play Blue's Clues to figure out where Blue wants to eat her snack.

Steve waves goodbye to the pawprint on the screen. Steve tries to get his notebook and then sees a Do Not Disturb sign over Sidetable. She was taking a nap and Steve had to quietly get his notebook without waking her up. Steve got his notebook and had to stand up tall but still tells the viewers he needed help trying to figure out where Blue wants to have her snack. Steve starts looking for clues and saw some toy figurines driving toy cars. Suddenly, there was a clue on a green light. Steve had to use a green crayon to draw the clue. Steve understood that Blue wanted to go somewhere to eat her snack. He had to find two more clues. Steve found pictures of Blue and arrows pointing to the left. Once Steve got outside, he saw Blue and Pail. Pail explained that Shovel left her signs to figure where he was but could not figure out what they mean. So, they help Pail by telling her what the signs meant. Pail and Steve go to the first sign. It had an arrow pointing to the right. The second sign they approached had an arrow pointing to the right but it had a red circle with the diagonal red line through it. So, if Pail could not go to the right, she had to go to the left. Pail and Steve were almost to Shovel. There were two signs. One sign told them they cannot swim across and another sign told them there was a bridge nearby. Once they crossed the bridge, Pail found his brother Shovel. He was picking flowers for Pail.

After that, Steve went looking for the second clue. The viewers helped him find it. It was a door with an arrow. Steve draws the second clue in his notebook. Steve then figures out that Blue wanted to go somewhere outside to eat her snack. He could not figure out the answer with just two clues. He had to find the third clue to get more information. Blue holds up a sign telling him it was Mailtime. Steve gets the letter from Mailbox, he opens the letter and it was a letter from his friends. The kids used body language instead of words. They used their hands for words like friends, sun, kitten, book, doll, Steve, and Blue. Steve closes the letter and heard a female voice calls his name. It was not one of the viewers. So, Steve stands up and kept hearing his name. Steve found out that it was coming from Jane in her book. Blue and Steve skidoo into the book. Steve asked to make sure if it was Jane who called his name and it was.

Steve gets introduced to Carly who is deaf. Carly cannot hear but talks using sign language. Carly had a story to tell. Steve watches Carly's signs very carefully. The story started off with One sunny day, a girl was sitting by a tree and then Steve got hung up on the last word. Carly was moving her hands to her mouth. Steve was told that Carly was using the sign language for eating. The story continued with Then, the girl stood up and began and Steve got stuck again. Carly moves her index and middle fingers and Steve thought it was walking. Then, the story resumes with The girl began walking and suddenly Carly opens her mouth wide giving a gasping look and opens her hands. Steve was told that it was the sign language for scared. Steve had to know what happened next and Carly continues to tell the story. The story resumed again with The girl became scared because she saw and Steve had no idea what Carly was making the sign language for. Steve was told the elephant. Then, Steve reviews the story from the beginning which was: One sunny day, a girl was sitting by a tree eating. The girl stood up and began walking. Suddenly she got scared because she saw an elephant. Steve wanted to know how the story ended. So, Carly tells the ending of the story which was: Then, the elephant and the girl became friends. Jane was amazed. Steve figured out the signs of Carly's story with the viewers' help. Jane and Carly gave a thumbs up which meant a good job. Jane and Carly decided to go play while Steve had to look for the last clue so he can figure out where Blue wants to eat her snack.

Blue and Steve skidoo out of the book and back to the bedroom. There was a sign to show where the living room was. All of a sudden, Steve saw a clue on the picture of a table. Steve draws the third clue in his notebook. Now that Steve had all three clues, he goes to the thinking chair. Steve sits in the thinking chair and is ready to think about where Blue wants to eat her snack. The clues were a green light, a door with an arrow and a table. Steve remembers that a green light means go. He also pictures the arrow pointing outside. So far, Steve thought Blue wanted to go somewhere outside that had a table. Steve was told that Blue wanted to go to the picnic table to eat her snack. They just figured out Blue's Clues. So, Steve and Blue got going outside to their picnic table and eat their snack. Steve was so hungry. He was about to eat when he saw Shovel and Pail. Steve also saw Jane and Carly. He told them they were about to have a snack. Carly rubs her tummy round and round. And so, they started eating their snack at the picnic table. Blue holds up another sign telling Steve that it was time for so long. Steve goes inside the house and sings the So Long Song and the episode ends.

Door with an Arrow 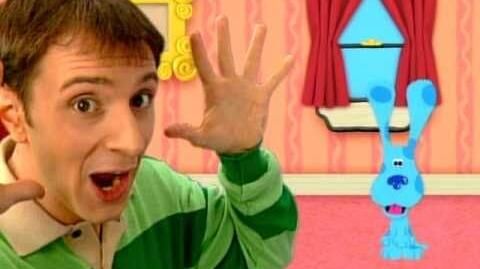