Who do you think Blue is feeling shy about?

A Bag
A Footprint
A Videotape (VHS)

Steve and Blue teach the viewers what to do if you feel shy when Magenta's owner, Miranda comes to visit.

Turquoise in her shell.

Can you see Turquoise poking out of her shell?

Look at that, Miranda has a notebook but it's much bigger compared to Steve's Notebook.

Miranda is looking into her bag.

Oh, look. A videotape with a picture of Magenta.

(Blue Whimpering) What is Blue doing behind the thinking chair?

Do you see Shovel peeking out from behind the bush?

Steve checks in on Shovel.

Shovel introducing himself to Sifter.

Shovel goes back to Steve. I guess this means he needs more help than just saying hello and introducing himself to Sifter.

Shovel goes back to Sifter. Soon after...

...Pail returns. Shovel, Pail, and Sifter play in the sand.

A human footprint on the doormat.

Did you see Blue skidoo into her school?

Duck is out in the hallway. Did you see Purple Kangaroo hop by?

Should Duck stay in the hallway or should he go inside and do something he likes?

Duck should go inside so he won't feel so lonesome.

Oh, Orange Kitten is shy too. She wants to play dress-up.

Should she ask if she can play and see what happens or should Orange Kitten sit and wait for one of them to ask her?

Orange Kitten should ask to play. (You never know unless you ask).

It worked. Orange Kitten can now play with Green Kitten and Giraffe.

Green Kangaroo has something special to share; his pet rock. But, he's too shy and nervous and doesn't know what to say.

He can practice in front of Steve and Blue or should he not take his turn today?

Now, he's sharing his pet rock with the whole class.

Time to skidoo back home.

OK, so Blue must be shy around a person who had a bag and a VHS tape.

The answer to Blue's Clues - Miranda.

It looks like Shovel and Duck wants to help Blue see if she has anything in common with Miranda.

Miranda is back. And now Blue hides behind Steve.

Hey, look. It's Magenta. Blue and Miranda both know Magenta.

Miranda and Magenta at the beach.

Blue and Magenta having a Pool Party.

From the US Version. 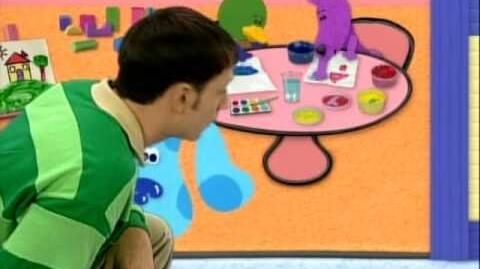