Rain Girl is an art character who only appears in "Art Appreciation". She is a French girl dressed in blue clothes with a hoop and stick who, along with a Shape Boy and a Line Man, fell out of their paintings. Her painting, called "The Umbrellas" by Pierre-Auguste Renoir includes her mother and some other people who also wear blue clothes.

Like what Steve says, she is mostly blue to match the colors of her painting. She wears a dark blue hat and dress and carries a hoop. She speaks with a cute voice and uses English and French to talk. She, like the two other art characters, finds out what painting she goes in. Her painting features her mother with an umbrella with people standing around. In the painting she also is seen with a red haired older sister.

"Well, I have the same colors as my painting."

"Steve: Okay, so which one of these paintings has the same colors as this little girl?"

"That's where I belong!" 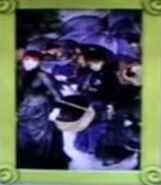 Close up of her painting without her in it.

The actual version of the painting, with more clear people. The girl clearly seen below.
Add a photo to this gallery
Retrieved from "https://bluesclues.fandom.com/wiki/Rain_Girl?oldid=122389"
Community content is available under CC-BY-SA unless otherwise noted.