Purple Kangaroo is a kangaroo currently attending Miss Marigold's preschool class. He is one of Blue's friends. He appears often in episodes of the Blue's Clues television series, most notably at preschool along with Blue, Magenta, Green Puppy, Orange Kitten, and Periwinkle (according to Blue Takes You to School). He is mostly in the Joe episodes but sometimes airs during the Steve era. As his name suggests, his favorite color is purple which is proven in "Blue Takes You to School".

Purple is one of Blue's classmates and also one of her best friends. He did not have a pouch until Steve and Blue bought him a blue pocket for Christmas. He is classified a recurring character in the Blue's Clues television series and often appears in school-based episodes of the show. He lives close to Periwinkle's House and the Blue's Clues House.

Purple is a purple color with pink on the inside of his ears. He has a long tail and a pair of large feet. He has 2 small black eyes with a big triangular nose (in the original episodes it was black, but in the computer games and reboot episodes it was pink).

Purple has appeared in several episodes. His first appearance was in "Blue's Sad Day". His last appearance in the original series was "Soccer Practice". 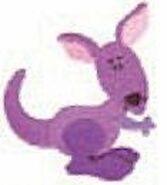 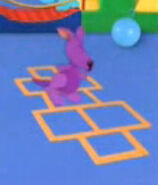 Purple Kangaroo in the reboot.

Add a photo to this gallery
Retrieved from "https://bluesclues.fandom.com/wiki/Purple_Kangaroo?oldid=143657"
Community content is available under CC-BY-SA unless otherwise noted.