What could you (the viewer) and Blue will play?

Water
A Hose
A Ladder

The Fairy Tale Ball (Broadcast/Credit Order)
The Legend of the Blue Puppy (Production Order)
Playdates is the sixth episode of Blue's Clues from season 6.

﻿This episode features playdates, special time playing with some of the characters in the Blue's Clues house. We blow on the Wheel of Playdates, having fun Blue, Joe, Periwinkle, & Mailbox. First, the viewers do a magic trick with Periwinkle. Next, they help Mailbox deliver the mail. In the skidoo segment, Joe performs a musical number about our friendship with him. Later, the viewers play pretend with Blue and her playroom friends in Blue's Room. 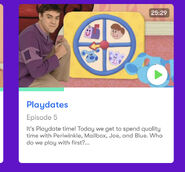 Playdates is on noggin

Look Close You Can See The Uk Spiral For Joes Notebook! 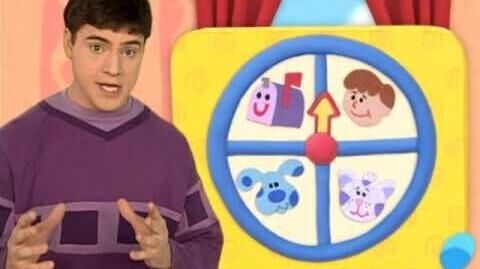