What can Periwinkle do to feel better about missing his friend?

Crayons
A Folded Piece of Paper
An Envelope

Make a card and mail it to his friend

Our New Neighbor
"Periwinkle Misses His Friend" is the 26th episode of Blue's Clues from Season 3.

Steve and Blue help Periwinkle find a way to make him feel better about missing his friend Plum.

Instead of heading inside, we meet Steve outside. He & Blue are hearing vroom vroom noises, so we have to go to investigate. We find Periwinkle, who is playing with a cardboard bus and seems to be talking to himself, although it turns out that he is actually pretending that his friend from the city, Plum, is there. Periwinkle just recently moved to the Blue's Clues neighborhood and he really misses his friend. He shows us a picture of him, he is a small, purple bird. Steve realizes with our help that Periwinkle is feeling sad and so we decide to help him out. When Periwinkle builds a city, Blue skidoos into it and after Steve tells Periwinkle what is going on, the two of them skidoo as well. In the city, we find Tractor, who needs help finding a friend. Tractor's friend told him where to look, but Tractor's not from the city and does not understand the directions. Fortunately, Periwinkle is from the city and so he knows just what to do. With Periwinkle's help, we track down this friend, Taxi, to a parking garage. Later on, we find Periwinkle playing games which he used to play with his friend. We found that these games do not work so well in the country, but we are able to help Periwinkle out to change them so that they work and are still just as fun. After that, Steve finds one more clue on a picnic table. After he wrote it down, he heads inside to his home and goes to the Thinking Chair. Periwinkle was outside writing a card to Plum and he puts it in Mailbox. Steve then heads inside to his home and sings the So Long Song. The episode then ends.

Blue skidooed into the city

Frame is now bowl and spatula

Frame is now periwinkle and plum 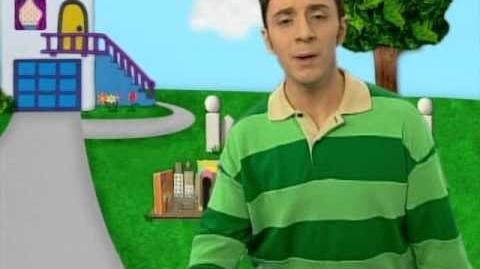