Luxton Handspiker
Periwinkle (or simply Peri) is a male kitten from the city who first appears in Blue's Big Mystery. He becomes a recurring friend of Blue afterward.

Periwinkle loves to do magic tricks, put on shows, build forts, and do things on a grand scale. He's very outgoing and likes to collect things. Periwinkle talks and is a male cat. Among his favorite hobbies are being mischievous and practicing magic. Periwinkle is friends with Plum, a purple bird (or Rainbow Puppy in Blue's Clues & You) that lives in the same city he lived in before moving to Blue's neighborhood. Steve and Joe often call him Peri. His favorite color is red which is proven in "Blue Takes You to School".

﻿Periwinkle is an excitable and sneaky kitten who came from the city. He recently moved into Blue's neighborhood and met many new people in the new environment in Season 3. He goes to school with Blue, Magenta, and many other animal children and enjoys playing with others and practicing magic tricks.

Periwinkle is a lilac tabby kitten, and he is bluish white with a periwinkle with blue triangles on his forehead. He has triangles on his back, triangular ears and a pink nose. Periwinkle has a short curvy and skinny tail and four legs; his feet have invisible toes. His right front foot is periwinkle and the other feet aren't.

In the reboot, he stands on his two legs, like Orange Kitten, and his front paws have visible thumbs, instead of walking on four legs like from the original.

Periwinkle has appeared in various episodes. His first appearance was in "Blue's Big Mystery" (as the answer to Blue's Clues). His last appearance in the original series was Bluestock. He made a return in the Blue's Clues & You episode "Our New Neighbor." 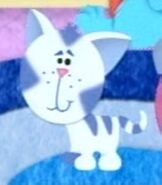 Blues Clues And You Periwinkle

Periwinkle blues clues and you