"Pajama Party with Blue" is the sixteenth episode of Season 1 in the reboot series Blue's Clues & You!. It is a remake of "Blue's Big Pajama Party."

Josh and Blue welcome us to the pajama party. He is ready, he has on his blue-striped pajamas and bunny slippers. Of course, it would not be any fun if we just went right to sleep and Josh certainly seems to think so; he insists that he is not sleepy, despite evidence of yawning. After Mr. Salt puts Sage and Ginger to bed, Josh asks Blue what she wanted to do tonight. Blue decided to play a nighttime game of Blue’s Clues. So before getting ready for bed, we have some fun. We head outside, where we find Shovel and Pail listening to the sounds of the night. We learn that there are some animals that stay awake at night. We identify an owl by his hoot and a squeaking bat. All of these animals are nocturnal; they are awake at night and then rest during the daytime. Josh then finds the second clue on a lamp. After Josh gets a cozy blanket from his grandma in the mail, Josh thinks of a deep question: Just why is it that we have night? Blue and Josh became "Pajamanauts" and skidoo into space, where they have a chat with the sun and the Earth and learn that the sun is always shining, but because the earth is always spinning, parts of it are in a shadow, away from the sun's light, thus causing night. After learning about the night to the day, they then skidoo back home, just as the late-night approaches. He takes off his blanket cape and puts it back in place. He then finds one last clue, which is a book, sitting on a table next to the front door. He draws the clue and sits on the Thinking Chair. The answer was: reading a book. Everyone gets ready for bed and Josh reads a bedtime book called "Goodnight, Bird" to the others. After reading, Josh sings the So Long song in a soft manner while playing his Handy Dandy Guitar. After they went to bed, Josh says “goodnight” and the episode ends. 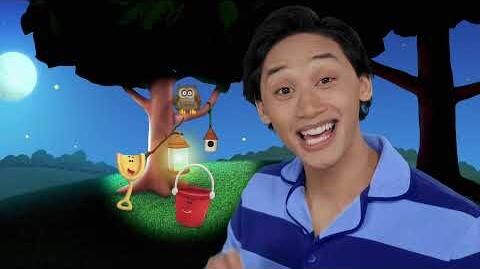 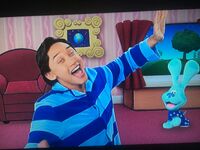 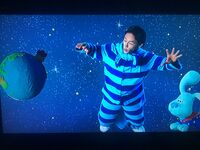 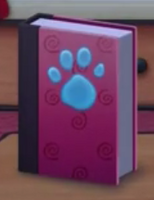 3 Clues From Pajama Party with Blue 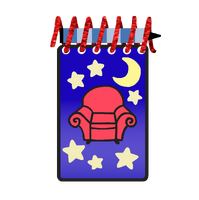