What does Blue want to see at the festival?

Blue's Big Neighborhood Adventure
Our Neighborhood Festival is the twenty-fourth episode of Blue's Clues from season 5.

Joe and Blue invite the viewers to a neighborhood festival.

There is a big neighborhood festival being held in the Blue's Clues neighborhood. Everyone is excited about everything that is happening, although different things excite different characters. Magic is always a mainstay with Periwinkle and he has Joe and Blue play a Guess Who game and then provides Joe with a festival passport in which he can put stickers to represent the various events he has attended. By playing Shovel's beanbag toss game, we get another sticker, as well as a modeled look of the neighborhood. Marlee the librarian also has a game to play, a storybook game in which we match characters with the stories that they belong in. At the end of it all, the evening is capped off with a beautiful fireworks display.

Dedication card for Fred Rogers before the credits roll. 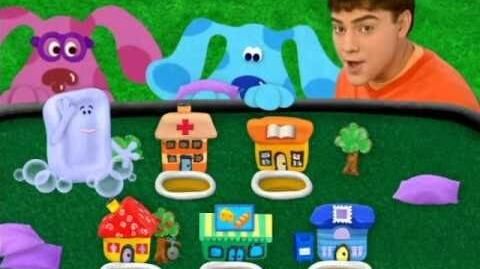