Blue's Clues Wiki
Register
Don't have an account?
Sign In
Advertisement
in: Characters, Other recurring characters, Females,
and 11 more

Orange Kitten is a kitten currently attending Miss Marigold's preschool class along with Blue, Magenta, Purple Kangaroo, Green Puppy, and Periwinkle (according to Blue Takes You to School), conveniently named after her color and species. She is one of Blue's best friends. She has appeared in some episodes of the Blue's Clues television series and is classified as a recurring character in the show. Her favorite color is pink which is proven in "Blue Takes You to School".

Orange is one of Blue's many friends from preschool, a young orange cat owned by a female human named Sam. The character celebrates Hanukkah with Sam, meaning that her owner's family is Jewish.

Orange Kitten is flame orange with a small, triangular, dark pink nose. She has darker whiskers and a desert sand tummy and muzzle, plus several stripes of the same color on her head and tail (3 triangular ones on her head [her ears are located between the stripes], and up to 3 stripes around her tail). She also has a pair of small black eyes and eyebrows.

Orange Kitten has appeared in some episodes. Her first appearance was in "Blue's Sad Day". She also appeared in the reboot in Sad Day with Blue. 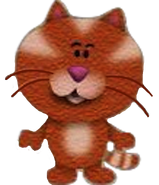 Orange Kitten in the reboot. 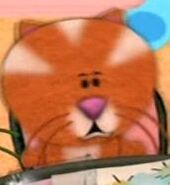 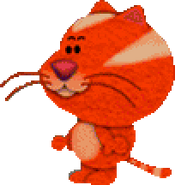