The Handy Dandy Notebook (Super Duper Notebook in the UK Blue's Clues Version, Bloco de notas amigável útil (Useful Friendly Notepad) in the Portugal Blue's Clues version, or simply Notebook in any version) is a small notebook used in almost every episode of Blue's Clues (mainly the ones where Blue's Clues is played) to write down the clues. Sidetable Drawer keeps it in her drawer when the hosts aren't using it, and at the start of each episode, they would go to her to retrieve it.

The name "Handy Dandy Notebook" has been used to describe Steve's notebook (used from 1996 to 2002), Joe's notebook (used from 2002 to 2006), and Josh's notebook/smartphone (used in Blue's Clues & You!). Common traits that many different variants of the notebook share include a red spiral and yellow paper. The notebook has a crayon in the spiral that reflects whoever owns it. Steve's crayon has a green-striped wrap around it (though if the crayon is a different color, the wrap is the same color with darker stripes), and Joe's crayon has a square pattern wrap that changes color based on whatever shirt he wears in an episode. In the reboot, Josh's crayon has a blue-striped wrap, matching the notebook cover.

It also appears as the first clue in "Draw Along with Blue", "Blue's Big Musical", and "Inventions"; and the answer to Blue's Clues in "Joe Gets a Clue". It is also the last clue as a phone in "Playdate with Magenta".

The covers for the Handy Dandy Notebook seen in Season 1 were made out of dense cardboard. Starting in What Does Blue Want to Make?, the covers were made out of birch plywood. The spiral, which was made from aluminum armature wire, remained the same throughout the entire series. One side of Steve or Joe's spiral would always be pinched in slightly to form a "U" shape, so that it could hold the tip of the crayon in place.

The notebook seen in the series pilot Blue Prints has highlighter yellow covers with a black outline, yellow pages and a thin black spiral. The front cover is noticeably blank with no graphic of the Thinking Chair, a feature that was added in the final version of Snack Time.

Steve's notebook is square-shaped, has a green front and back cover with black lining, and depicts the Thinking Chair on the front. When Steve went to college, he started using the notebook to take notes during his classes. This notebook is perhaps the most recognizable, and also comes in many different variants.

The same notebook is used by Kevin in the UK version from "Pretend Time" until "Something To Do Blue".

This variant has a yellow ribbon wrapped around it, making it resemble a birthday present.

This variant has a red treasure chest with sparkly gold lining on the front instead of the Thinking Chair. It also has a secret compartment on the back cover that holds a treasure hunt hint.

When Steve goes outside at night, the notebook changes to reflect the time. It has a black front and back cover with yellow lining, a yellow moon and stars on the front, and a yellow-lined Thinking Chair. This only happens when Steve goes outside and finds the second clue, so when he finds the third clue in the living room, the notebook changes back. But in the Portuguese version, it was used throughout the episode.

This variant has a white front and back cover with a silver snowflake on each corner (each snowflake has a different design), and there is a tall yellow present with a green ribbon on the Thinking Chair. Also, when Steve shakes it, the notebook makes a jingling sound.

This variant has front and back covers with wooden lining on the bottom and left and right sides, a brown spiral, dark beige paper, a crayon that looks like it was carved from a log of wood, and a front cover that depicts the Thinking Rock instead of the Thinking Chair.

This variant has a tall rectangle shape with a red crossed fork and spoon on the cover and white papers.

In Joe Gets a Clue, Blue gives Joe his own notebook to play Blue's Clues with. It is shaped like the Thinking Chair, and is thinner and taller than Steve's notebook.

In the UK version of "I'm So Happy!", Kevin is given this notebook by Sidetable Drawer.

This variant is the same shape as Joe's normal notebook, but is thicker and has a front and back cover made of the same material as a pillow.

This variant is essentially Joe's notebook with a pair of googly eyes, curly yellow yarn hair, and a green strand with frayed edges for a mouth. Sidetable and later Joe pretended to have it talk with them and others.

This is the only variant of Joe's notebook that does not use the Thinking Chair shape. Instead the notebook is shaped like a heart, and the front and back covers are red with yellow lining.

This variant comes in gold, and uses a slightly-different design of the Thinking Chair.

Josh's notebook is rectangular with rounded corners and has light and dark blue stripes on the cover like Josh's shirt. The notebook also has a phone on the back. When pulled out, the sound is a boxing bell similar to Steve's notebook chime.

This variant has a red cape on the back.

This variant has musical notes on it. All are eighth notes, three single notes and two double notes.

This variant has sparkly stripes and the Thinking Chair wearing a pirate hat.

Christmas Notebook (or The Very Merry No ho hotebook)

This variant has three snowflakes (two with the same design) and the Thinking Chair wearing a Santa hat. When it is shaken, it makes a jingling sound, like Steve's holiday notebook.

This variant is the same as the regular, but has four pink hearts on it (2 small, 2 big).

This variant is the same as the regular, but the Thinking Chair is under the umbrella.

This variant is the same as the regular, but has a lot of flowers.

This variant is the same as the regular, but the Thinking Chair is wearing a party hat. 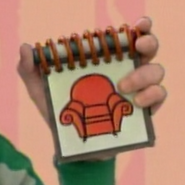 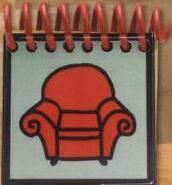 Inverted stripes on the crayon

U shaped end that keeps the crayon in place 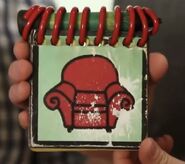 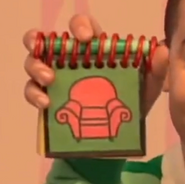 Alternate cover design in Korean version of "What Experiment Does Blue Want to Try?" 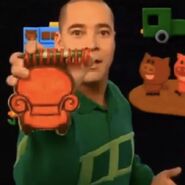 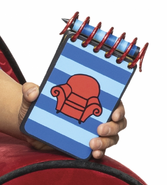 The Phone on the back of Josh's Notebook 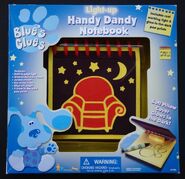 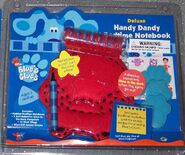 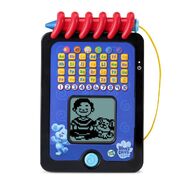