What are Blue and Polka Dots gonna play?

Up
Stars
A Planet

The Scavenger Hunt (Broadcast Order)
Our Neighborhood Festival (Production Order)
I Did That! (Credit Order)
Meet Polka Dots! is the 25th episode of Blue's Clues from Season 5.

The viewers get to learn about having imaginary friends.

This episode introduces viewers to Polka Dots, a small, stuffed green dog toy of Blue's with purple polka dots, who previously appeared in some of the Blue's Clues episodes. They also learn more about Joe's stuffed duck, Boris. Blue plays pretend with Slippery, learning that using their imagination and perhaps their stuffed friend, they can do anything that they want to do. Then, Blue meets Periwinkle's friend, Mr. Plate, and visit new places and situations with the two of them. 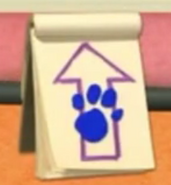