Blue's Clues Wiki
Register
Don't have an account?
Sign In
Advertisement
in: Episodes, Pilots and Pitches, Blue's Clues & You! Episodes,
and 19 more

Snack Time
"Meet Josh!" is the very first episode of Season 1 in the reboot series Blue's Clues & You!. It is a remake of "Snack Time."

In the first episode of the reboot series, Blue is having her snack. But something is missing from her snack and Josh Will Need The Viewers Help To Play His First Game Of Blues Clues To Figure It Out the viewers helped Steve and Joe teach Josh how to play play Blue's Clues to figure it out. They also identify the shapes of fruit, and they help match chicks on a farm.

The series premiere of the reboot opens with Josh inviting the viewers into the house. Suddenly, he does not see Blue. The viewers saw her under the table. Blue comes out from under the table. Then, she sits in her seat. Josh and Blue were going to have graham crackers for snack. Blue tells Josh she wants something else with her snack. Josh doesn't know what to do, so he calls Steve, who’s maybe college job is a detective agency, and Joe, who works at a present store, and they tell Blue and then him to play Blue's Clues. The viewers along with Steve and Joe teach Josh how to play the game. They have to find a paw print which was the first clue. Then, they have to draw it in the notebook. Next, they have to find another paw print being the second clue and so on. After that, they go to the thinking chair and put all three clues together.

Now that the viewers, Steve, and Joe know how Josh has to play the game, Josh leads them into the bedroom. The viewers saw a clue on the cup. Josh draws the cup in his handy dandy notebook. After drawing the first clue, Josh wonders what Blue could have with her snack. Josh realizes that Blue wants to put something into the cup. They had to find two more clues. Josh was looking for Blue again. The viewers find a sudden sound startles him and falls down back onto the floor. He realizes that it was the telephone. Josh answers it and finds out it was Mr. Salt and Mrs. Pepper calling. They tell Josh that Blue is in the kitchen and is making a really big mess.

Josh goes to the kitchen and then asks Blue what she had done. "Blue knocked over the grocery bag," says Mr. Salt. "That's what she did," adds Mrs. Pepper. It was time to clean up the mess. The foods were in different shapes. One-by-one, they put away all the different foods into the fridge. The orange was shaped like a circle. The Swiss Cheese was shaped like a square. The graham cracker was shaped like a rectangle. And the grapes were shaped like a triangle. They all went into the fridge. Once all the food was put away, it made a house. The square Swiss cheese for the house, the triangle grapes for the roof, the rectangle graham cracker for the door, and the orange for the sun. Blue comes out of the house made of food and knocks something else down. Josh sees what Blue knocked over. It was the straws. Josh picks up the cup and stands it on the counter. Next, he picks up the straws and puts them back in the cup. Josh thought he put away all the straws but then the viewers saw another straw with paw prints. Whenever Josh tries to find where the straw is hiding, it switches sides. Josh peeks between the straws and finds the straw with the paw prints on it which were the second clue. He draws the straw in his notebook. So far, Josh has a cup and straw as the two clues. Josh realizes that with these two clues, Blue wanted something to drink. Then, it is mail time.

Josh gets his letter from Mailbox. Josh reads the video E-mail which had kids said hi to Josh. After reading the E-mail, Blue skidoos into a picture frame that shows a farm. Josh follows her. He skidoos too. There was a pig who jumped into a mud puddle. There was a sheep who ate a flower. Then, he saw a swarm of chicks. One of them had a paper hat on. Josh sits down and the chick who wore a paper hat lands on Josh's hand he was holding out. The chick was trying to find her friend who wore a newspaper hat that she has on. After a couple of tries, she finds her friend. They were a good matching pair. They also help a chick who had a baseball cap with a star on it find his friend and one who wore a party hat find its friend too. Now, Josh needed help finding Blue. Blue was on Josh's head. Blue gets off of Josh's head as he stands up. As Josh was looking for Blue, he finds paw prints on a cow. A cow was the third clue. Josh draws the third clue, a cow, in his notebook.

Now that he has all three clues, Josh and Blue have to skidoo back home and sit in the thinking chair to figure out what Blue wants with her snack. They both did so. Now, that they were in the thinking chair, it was time to think. The clues were a cup, a straw, and a cow. "What does Blue want with her snack?" Josh wonders. Josh thought Blue wants to put the cow in the cup and slurp it up with a straw. That did not make any sense. What they do know is cows makes the sound, "moo." So, what could Blue want with her snack that comes from a cow, you drink with a straw in a cup? The answer was milk because cows make the milk that gets poured into a cup. And that you drink it with or without a straw. They just figured out Blue's Clues. Now, it was snack time. Josh had two cups filled with milk. One for himself and one for Blue. Blue sits at the table and drinks her cup of milk with a straw. Suddenly, Magenta; followed by Mr. Salt, Mrs. Pepper, Paprika and Cinnamon, and the shape foods they put away earlier, then, the chicks also came. They all had different hats on as Josh receives a call from Steve and Joe. They ask Josh if he figured it out , and Josh says it was milk. With a little help from his friend, Steve, Joe, and Josh all sing the "So Long song" and the episode ends. 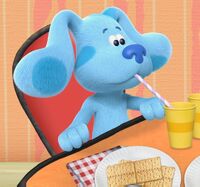 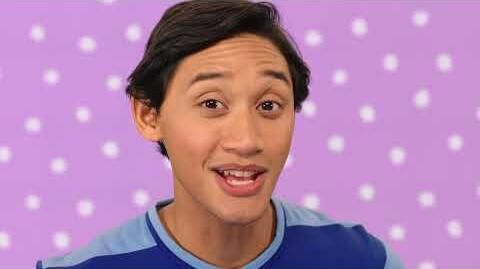