Who is Blue's baby brother?

Blue's baby brother is here and they play a game of gold clues (which has rules that is the same to Blue's Clues) to figure out who he is.

﻿As the viewers enter Blue's Room, Blue greets the viewers and says that they are just in time for her family party, a special party for family members. She walks over to a brightly decorated table where Fred, Polka Dots, Joe and Mailbox are seated. She explains that her party is a party for everyone she knows, and all their families. She asks who is in the viewers' family, and comments how nice they sound. More guests arrive. First, Mr. Salt, Mrs. Pepper, Paprika and Cinnamon, then Roary and his grandmother, who has baked a sweet potato pie for the occasion, and finally Shovel and Pail. The party is about to get underway when Mailbox notices that there is still one vacant place at the table. Joe explains that that chair is being saved for the guest of honor; someone really special in Blue’s family. Blue asks if the viewer wants to know who, and after a bit of coaxing, reveals that she has a new baby brother. Everyone is shocked and ecstatic at this news. Polka Dots asks where he is. Blue and Joe get up from the table. They walk over to a picture on the wall, and Blue announces that her baby brother was born in a location called Puppyville, accessible through the painting. Blue asks if the viewer will come along to help. The viewer agrees. Blue and Joe skidoo into Puppyville.

Once there, they start asking each puppy they see if they are Blue's brother. The puppies only say that they could be and are not sure. Blue asks herself how they will find Blue's baby brother. Suddenly, a large gold pawprint appears. Blue and Joe realize what it means almost instantly: to find Blue’s baby brother, they need to play a special version of Blue’s Clues called, "Gold Clues" to figure out who he is. Both Blue and Joe are excited at this prospect. As they review the rules of the game, Joe is given a Gold Handy Dandy Notebook, and they discover a golden Thinking Chair on top of a hill. Joe excitedly asks where they should look for Gold Clues. A train whistle sounds, and a few puppies tell them to take the Puppyville Express, as it is the quickest way to get all around Puppyville.

Blue and Joe are about to hop on when Blue spots a plain white puppy hiding behind a bush. Blue and Joe go over to introduce themselves, but the puppy ducks out of sight. Deducing that he must be shy or scared, Joe and Blue gently tell him their names and invite us to do the same. The puppy says his name is Sprinkles and explains that he is here at the train station because he has no spots, and is going on an adventure to try and get some. Joe and Blue invite him to come along with them. Sprinkles joyfully accepts by yapping and the three-hop on the train.

After a few minutes, the train arrives at the first stop, Alphabet City, a location where all buildings are shaped like alphabet letters. They quickly meet another puppy, ABC Puppy, who formally welcomes them to Alphabet City. Suddenly, many balloons start floating away with the first clue. Joe runs over to grab them and is pulled into the sky. ABC Puppy whistles for a taxi so they can chase after Joe and the balloons. He explains that the only way to make the taxi cab move is to follow the alphabet. Sprinkles admits that he does not really know how to read or write because he doesn’t know the alphabet yet. Blue offers to help, and they grab letters from the sky to make letters, stopping along the way to remember what letter comes next. When they finish, Blue compliments Sprinkles on his good work, and Sprinkles excitedly confirms that he has learned his letters. Suddenly, there is a bright flash, and pink spots appear on Sprinkles. Sprinkles is dumbfounded as to how this could have happened, but Blue realizes it must have been because he learned his letters. As Sprinkles howls with excitement and sing that he's got spots, Joe finally starts to float down and is rescued by all three puppies. Joe spots five letters spelling the word "PUPPY" with a gold pawprint on them. He writes down a puppy in his notebook. Joe congratulates Sprinkles on his spots, and he, Blue, and Sprinkles board the train for their next location, Color Town, made of various art supplies.

When they get to Color Town, they meet one of the resident artists, Art Puppy, who leads them over to his latest project, a rainbow shortcut to the Numbers Kingdom. The trouble is it’s not fully painted. Art Puppy explains that some of the colors are gone. Sprinkles offers to fix the rainbow, but admits that he does not know his colors yet. Blue offers to help. Using colorful clouds and a giant paintbrush, we soon find and mix the right colors to complete the rainbow. Blue compliments Sprinkles, and with another flash, orange spots appear on Sprinkles as a reward for learning his colors. After this, Art Puppy invites them to take his shortcut, and he and Joe quickly slide up the rainbow. Sprinkles admits he is nervous, and Blue offers to ride with him.

On the count of three, they both slide up the rainbow and down the other side into Numbers Kingdom. They quickly meet the Princess of Math Puppy, and Joe decides to dress the part, returning in full armor as Knight Joe and speaking in medieval lingo. The princess offers to show them through her castle because the second pawprint was inside, but says that they must know the Clapping Codes to get through the doors. Seeing that these codes involve numbers, Sprinkles admits he does not know his numbers yet. Blue offers to help, and using their numeracy skills, they clap down each door, even using simple addition to get through the tower door. Once all the doors have been opened, Sprinkles receives purple spots as a reward for learning his numbers. Then, they saw the gold pawprint with a few circles, and Joe draws them in. Joe changes out of his knight costume, and the three puppies board the train for a trip to Shapes Forest.

Once there, they meet Shapes Puppy, who tells them that they must reach Shapes Island in order to complete their quest, plus the final pawprint was there. To do so, he says, they must build a sailboat out of shapes. Luckily, the Shapes Forest has shapes in abundance. Sprinkles asks if he can help, so Blue and Joe help him locate the perfect shapes to make a seaworthy vessel, even cutting a square to create the shape we need for the sail. Once the sailboat is complete, Sprinkles receives yellow spots as a reward for learning his shapes. Joe dresses up as a boat captain and the three of them hop in the boat and blow it across the ocean to the island. Once there, Sprinkles plays a coconut shell game to find the third and last Gold Clue: colors.

All three excitedly hop back on the train. It chugs all the way back through Puppyville and up the hill, stopping in front of the Golden Thinking Chair. As all three hop out, all the Puppyville puppies arrive to watch Blue and Joe sit in the chair to answer the most important question of all, who is Blue's new brother? Blue and Joe conclude that the puppy must have spots that are the exact same colors as the clues. But who could it be? They then realize that Blue’s new brother is Sprinkles!

Having figured out the answer, Sprinkles sticks his head over the edge of the chair, eager to know who Blue’s baby brother is. Joe vacates his seat, and Sprinkles sits next to Blue in the Thinking Chair. The viewer tells him the incredible news, Sprinkles is Blue's brother. Sprinkles is shocked, and it is confirmed when there is one final flash, and blue spots appear on Sprinkles, just like Blue's. The whole hill barks and yaps and howls with delight as Sprinkles and his big sister unite in song.

Sprinkles, Blue, and Joe all skidoo back to Blue’s Room, where Blue introduces her family to its newest member. Joe officially kicks off the family party, and Sprinkles joins his sister at the head of the table as the guest of honor. He is not there for long, though, before the whole room begins to dance in celebration. Blue and Sprinkles thank the viewer for helping them find each other as the viewer exits and the episode ends. 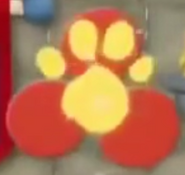 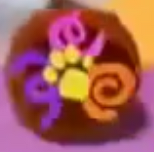 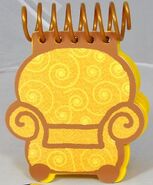 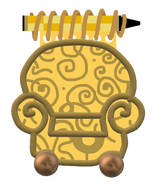