What do we need to fix?

"What Is Blue Trying to Do?"

"Mechanics!" is the twentieth episode of Blue's Clues from Season 2. It is the fortieth episode to be produced and aired.

Steve and Blue teach the viewers on simple machines that make things move or work.

Blue went in the direction of the kitchen. Steve finds the first clue on string and draws it in his notebook. Blue & Steve go outside. Shovel and Pail are playing with toy cars. Gopher is in the hole. Shovel and Pail build 6 blocks on 2 toy cars. The cars drive down the ramps. Steve finds the second clue on wind and draws it in his notebook. It is Mailtime. The letter is about 3 kids recording voices with a microphone. Blue & Steve skiddoo in a road race game board. The rabbit and pig fix the cars with tools. A skunk throws the diamond shaped piece of paper in the road. Steve finds the third clue on a diamond shaped piece of paper and draws it in his notebook. After that, Steve collected all three clues. Now it was time to sit in the thinking chair. Blue & Steve skiddoo back home, but Steve sits in the thinking chair and is ready to put all 3 clues together. The clues are a string, wind, and a diamond shaped piece of paper. The answer is the kite.

After figuring out Blue's Clues, Steve & Blue get ready to fix the kite. Blue tapes the kite with sticky tape. They saw the kite flying to the sky. Steve sings the So Long Song and the episode ends. 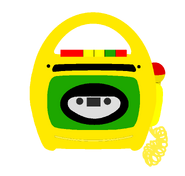 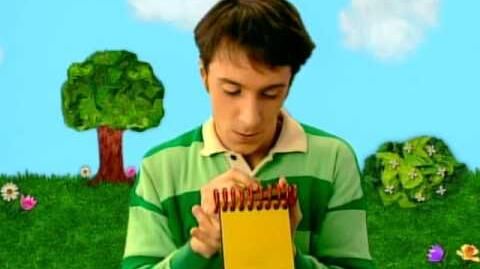