What does Blue want to buy?

123's With Blue!
"Math!" is the eighth episode of Blue's Clues from the second season. It was the twenty-third episode to air and the twenty-eighth produced.

Steve and Blue teach the viewers about counting and doing the process of math.

Steve and Blue are counting along. Steve needed a new crayon because he cannot write very well since it is downright puny. He plans to get a new crayon later. Blue wanted to buy something too. Blue has Steve play Blue's Clues to figure out what she wants to buy. Steve gets his notebook from Sidetable. Now, Steve counts out how many clues he had to find which was three. He takes ten steps into the kitchen, near an ice cube tray with ten ice cubes and an ice bucket with five ice cubes (one was behind the other four, which were stacked in a two-by-two square). He counts out ten ice cubes in the ice cube tray. After counting the ice cubes, the stacked ones in the bucket collapses to reveal a paw-print on the other ice cube. Steve draws the first clue with a nubby crayon. Steve genuinely promises that he will get a new crayon soon, but he still needs more clues. But first, he helps Mr. Salt and Mrs. Pepper count their apples. Mr. Salt had three apples and Mrs. Pepper had five apples. He also had to find out who had more apples. Mrs. Pepper had more apples because five is less than three. Next, Steve made sure that both Mr. Salt and Mrs. Pepper had the same number of apples; four. Then, he had to figure out how many they had altogether to take to the picnic. Mr. Salt and Mrs. Pepper had eight apples altogether because four plus four is eight. After that, he counts how many steps it takes to get from the kitchen to the garden. Then, helps Shovel and Pail count their graham crackers. Shovel had eight and Pail had seven. Now, Steve had to figure out who had more graham crackers. Shovel had more graham crackers because eight is greater than seven. Then, Steve had to figure out how many they had altogether to take to the picnic. Shovel and Pail had 15 crackers altogether because seven plus eight is 15. Steve heads back into the kitchen to the area near the sink. On the left side are one picnic basket with a picnic blanket and one baguette inside it, while on the right side there are five cups (one has a paw-print on it while the others are stacked), four stacked plates, and ten spoons in two rows. He asks how many picnic baskets there are, and the viewers answer one. He then asks how many paw prints there are, the viewers also answer one. When Steve says they are right, the viewers say it is a clue. Steve agrees (one paw print, one clue), before realizing that the viewers found the second clue. He asked where it is. They said it was on the cup. Steve finds it and concludes that their second clue is a cup. He gets his notebook out and draws the 2nd clue with the nubby crayon. In the Mailtime segment, Mailbox counts from 25 to 27. After saying hi to Mailbox, Steve asked 27 of what. Mailbox said there were 27 stamps in his stamp collecting book and shows them to Steve before giving him his letter. In the letter, a group of four kids each wanted the same amount of pizza. First, the pizza was cut into two slices, which was not enough, so the pizza was cut into four equal quarters. Each kid got a fourth slice of pizza. After that, Steve Skidoos into the present store. Steve pulls out his wallet and he had seven Blue dollars. He buys a new crayon which was worth two Blue dollars. He had five Blue Dollars left because seven minus two is five. Steve wanted to buy something else with what he had leftover. He thought he could buy a pair of green socks, but they were worth six Blue Dollars and he was one Blue Dollar short. He buys himself a green cap which was worth three Blue Dollars and he had two Blue Dollars left because five minus three is two. After purchasing the new crayon and green cap, Steve gets going but finds the third clue on one of two (the other was sliced in half) lemons. Steve draws the third clue with his new crayon into his notebook. After realizing that they have all three clues, Steve Skidoos back home with Blue and tries to put all three clues together. The clues were ice cubes, a cup, and lemons. Steve thought maybe Blue could have a lemon wear the cup as a hat and slip around on the ice cubes. That was the wrong answer. Suddenly, the viewers had an answer which was lemonade, because lemonade is made from lemons and ice cubes that are poured into a cup. After figuring out Blue's Clues, Steve and Blue head outside to figure out where they can find some lemonade. Sure enough, they see Shovel and Pail at the toll booth. They had lemonade to sell. Steve had to pay Cash Register one Blue Dollar for the lemonade. He did so and Blue got to enjoy it. Steve then declares that he only has one Blue Dollar left in his savings. Steve goes back inside and sings the So Long Song and the episode ends. 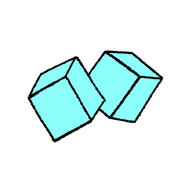 Now Mr. Salt and Mrs. Pepper both have four apples.

From The UK Dub. 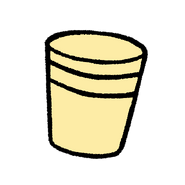 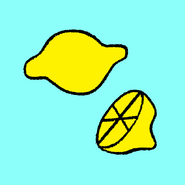 Wrong answer from the Portugal Dub. 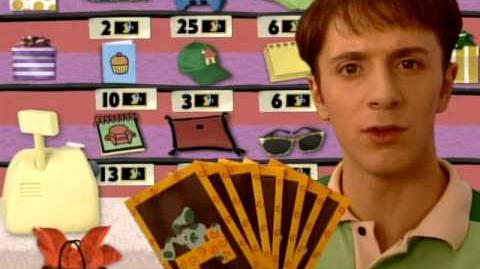 Mailbox: 27 in my Stamps Book See.

(Stamp Book opens the 27 stamps inside)

Steve: Woah! Look at all these stamps, that, that's pretty good collecting.

Mailbox: Thank you, Oh, And I think there's a letter for you too, Steve.

(Steve getting letter out from Mailbox)

This episode had many video releases, including the following: