What could Blue want to do when Magenta comes over?

Steve
A Smile
A Camera

Take a picture and say smile

Playdate with Magenta
"Magenta Comes Over" is the nineteenth episode of Blue's Clues from the first season. It was the fifteenth episode aired in the United States.

"Blue has a play-date with her best friend Magenta. We play Blue's Clues to determine what Blue wants to do when Magenta comes over. In addition to finding Blue's Clues, we identify and categorize footprints in the backyard with Shovel and Pail, we explore the concept of opposites with Mr. Salt and Mrs. Pepper, and we help the Felt Friends pick out costumes by making associations."

Steve and Blue invite the viewers inside the house. After that, the phone rings. Steve answers the phone. Magenta was on the phone and wanted to talk to Blue. What Magenta was saying is that she is coming to Steve and Blue later on. After talking to Magenta, Steve hangs up. Steve and Blue had to get ready and had to figure out what they can do when Magenta comes over. Blue leaves a paw print on the screen. It was time for another playing of Blue's Clues. Now, Steve had to figure out the best way to remove the paw print. Blue comes in and brushes away the paw print with her ears going from top to bottom. After that, it was time to get the Notebook. Steve was already in the living room and walks over to Sidetable to get his notebook. Steve brushes up on the rules to play Blue's Clues to the viewers. After the demo song, Steve did not know where Blue went. The viewers told Steve that Blue went to the left.

As Steve was looking for clues, the viewer points out a clue. Steve stops and wonders where the clue was. The viewers told him, "On your back," and thought that Steve should look at the wall. Steve shrugs and then the paw print appears from behind his back. And then it moves sits on his chest. Steve looks down at his chest and he realized that he was suddenly the first clue. Steve gets out of his notebook and draws himself. What Steve is trying to figure is what to do when Magenta comes over with Steve as the first clue. Steve decides to look for more Blue's Clues. Blue calls out and then she listens. A couple of voices say, "One, two, three, four, five, six, seven, eight, nine, ten. Ready or not, here we come!" It was Shovel and Pail. They find themselves by mistake and bumped into each other.

What Shovel and Pail were trying to do is find their friends and needed help. Steve and Blue pitched in to help Shovel and Pail find their friends. Steve wonders who to look for first. Shovel and Pail decide to look for Duck. As they go along, they try to be quiet, hoping no one else will know about the footprints. Steve, Blue, Shovel, and Pail found a series of footprints. Steve needed help in figuring out which footprints led to Duck. The footprints in the middle were duck prints. So, they followed the path in the middle which stopped at a lake. Duck pokes out from behind the grass. Shovel and Pail found Duck and now they got to find Snail. Along the way, they found more prints. Steve asks the viewers at home which trail led to Snail. The long straight line was the way to find Snail. Sure enough, they find Snail. Snail winks and moves slowly away. Steve and Blue had to get going because it was almost time for Magenta to come over. Steve finds footprints and realized it was his footprints, although he admits he was just checking.

Back inside the house, Mr. Salt and Mrs. Pepper were discussing opposites in the kitchen. Steve and Blue come into the kitchen to see what they are up to. Mr. Salt and Mrs. Pepper were making a snack for when Magenta comes over. They decided to make race cars (one for Magenta and one for Blue). Steve was perplexed a little and says race cars... for a snack. Mr. Salt specifically meant that they were going to make race cars out of food so they can eat them after they made. Mr. Salt and Mrs. Pepper needed help on what food to use to make race cars. Mrs. Pepper starts with a carrot and Mr. Salt wants the opposite for making his race car. The opposite of the shortest is the longest. And the longest vegetable between the pickle, the asparagus spear, and the celery stalk, was the celery. So far, they got the bodies of the race car. Mr. Salt comes back and picks out crackers for his race car because they are the biggest. Mrs. Pepper wants the opposite of her race car. The opposite of the biggest is the smallest. And the smallest sized circles on the table between the carrot slices, the zucchini slices, and the peas, were the peas. Now, they got wheels for race cars. All is left is the seat. Mrs. Pepper finds broccoli for her race car which is the bumpiest. Mr. Salt wanted the opposite for his race car. The opposite of the bumpiest is smoothest. And the smoothest vegetable on the table between the kabocha, the sweet potato, and the portabello mushroom, was the mushroom.

Mr. Salt and Mrs. Pepper have finished making their race cars. Mr. Salt says "Viola!" for Magenta. Mrs. Pepper says "Viola!" for Blue. Steve was amazed and they did look a lot like race cars. Once they thank Steve for their help, Steve pretends to be a race car (presumably a dragster as he goes in a straight line), by suddenly passing the second clue and it was on a smile icon. When the kids stop him, Steve gets out of the notebook and draws the smile icon. So far Steve has collected two clues. The first clue was Steve himself and the second clue is a smile. Steve had to find the last clue. Steve thought the viewers said something. So, Steve looks around and sees Freddy and Fifi the felt friends on the felt board. The felt friends needed help. Blue Skidoos into the felt board to help Freddy and Fifi. Steve Skidoos too. Freddy and Fifi were playing dress-up. Freddy and Fifi have to figure out two kinds of costumes that go together. Fifi dresses as an umpire. Freddy did not know what he should dress up as. Steve wanted to know which costume goes with an umpire. The viewers tell them it was the baseball player. Freddy dressed as a baseball player and Fifi dressed as an umpire. Freddy and Fifi decide to dress as someone else.

Freddy dresses as a lifeguard. Fifi ponders about what she should be if Freddy is dressed as a lifeguard. The viewers tell them that the swimmer is what Fifi should be. Freddy and Fifi try out another set of different costumes. Fifi is now an astronaut. Freddy had to think about which costume to choose if Fifi is dressed as an astronaut. The viewers tell him that the alien works best. Freddy and Fifi thanked Steve for their help. Blue and Steve skidoo back home. Once back home, it was Mail time. Mailbox comes in through the window and gives Steve his letter. Steve thanks Mailbox and then Mailbox leaves. Steve opens the letter and it was a letter from his friends. Two kids played with blocks, had a snack, and dressed up in costumes and funny hats. After watching, Steve could not wait for Magenta to come over. They were running out of time and had to find the last clue.

All of a sudden, Mailbox comes back. Not knowing this was coming, Steve shrugs. Mailbox had something for Steve, but Steve just had a letter that he just looked at. Mailbox understood, but it turns out that he also has a package for Steve. Steve gets the package and opens it fast. Steve saw that it was his camera, something he was looking all over for. The viewers saw a paw print on the camera. Steve takes a look and realizes that the camera was the third clue. Steve stands up and draws out the camera in the notebook. After that, he has collected all three clues. Now it was time to sit in the thinking chair. Steve looks around and he sits back down in his thinking chair as it was already behind him this time. Now it was time to think; Steve had to figure out what Blue wants to do when Magenta comes over and the clues are Steve himself, a smile, and a camera. Steve thought that Blue wanted him to make the camera smile but that was not it. Steve looks at the clues again and maybe he could do something with the camera and saying smile. The viewers tell Steve that he should take a picture of Blue and Magenta with his camera and said smile. They just figured out Blue's Clues. But before they can finish their tune, the doorbell rings because Magenta has arrived.

Magenta pokes her head through the door flap and comes inside. Blue and Magenta cheer. Steve gets his camera ready. Blue and Magenta pose for their picture. Steve decides that the viewers should take the picture. Shovel and Pail come along followed by Mr. Salt, Mrs. Pepper, and their race cars for Blue and Magenta to have for snack time. And then Freddy and Fifi come back and finally made their decisions on what they are dressed as. Freddy was dressed as Magenta and Fifi were dressed as Blue. They all got together in the picture and the camera snaps a picture of the group. Blue decided to take some pictures too. Steve sings the So Long Song and the episode ends.

Error: A package can be seen before Mailbox came back 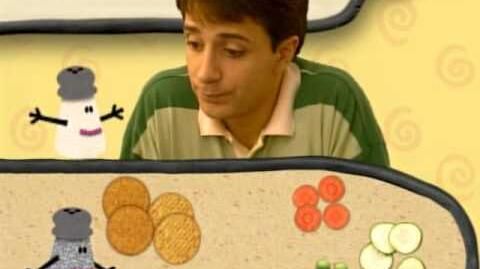