What does Blue want to write in her message?

Come to our house

Body Language (Broadcast Order)
Let's Write! (Production Order)
Blue Takes You to School (Credit Order)
Magenta's Messages is the 18th episode of Blue's Clues from season 5. Originally planned to air on June 9, 2003. However, this episode aired on TV on September 18, 2003 and there is currently no internet evidence of why it aired late.

Magenta is taking a trip to the beach and she asks us to look after her house. Fortunately, they are not without help, she has left them several written and picture messages to tell them what to do. They help out with things such as feeding her fish and taking out her recycling. They get to find out what more of the inside of her house looks like and even have fun solving a game of Blue's Clues outside. 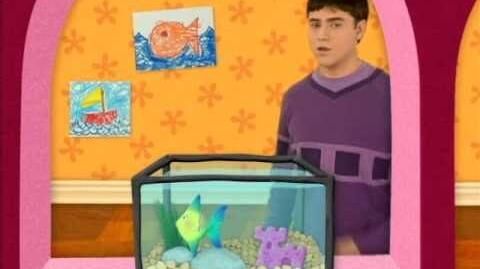