Who sent the Love Day card?

A Mop
A Castle
A Glass Slipper

What I Like About Blue
Love Day is the second episode of Blue's Clues from season 6.

Today is Love Day. Joe receives a mysterious Love Day card from a secret admirer and wonders who it could be. Joe meets Mr. Salt, Paprika & Cinnamon. The characters explore the meaning of love and learn some important things, such as that someone can love more than one person and that you can get mad at someone and still love them. The Skidoo segment features a story that emphasizes the value of true love. In Blue's Room, Blue talks with Cinderella and gets the answers to some unresolved questions, such as whether or not Cinderella married her prince.

Joe welcomes us in and we can't help but notice that the Blue's Clues house is decorated with hearts everywhere. Joe tells us that it's "Love Day" and shows us that Blue made a Love Day card that says "Blue loves you." He sings about it, "it's love, love, love." Just then, another heart-shaped card appears and flutters to the floor. It turns out that it's for Joe! Joe's excited - somebody loves him! The card isn't signed, though, so he doesn't know who sent it. In this episode, we and the various characters of the show explore love. To get things going, Side Table Drawer gives us a heart-shaped handy-dandy notebook to use. We head into the kitchen, where we find Mr. Salt, who says that it's time for a snack. Cinnamon and Paprika are there and he gives them heart-shaped cookies. Cinnamon says that he loves him, and Mr. Salt tells him that he loves him, too. This makes Paprika cry; she thinks this means that Mr. Salt doesn't love her. Mr. Salt tells her that this isn't true - after all, she loves more than one person, doesn't she? Paprika thinks about this and realizes that it's true. Next, we find Shovel and Pail outside in the backyard, making a sand castle. Then, Shovel accidentally knocks it down and Pail gets upset. Shovel tells us that Pail's angry at him and wants to know if we think Pail still loves him. Shovel and Pail work out their situation and we learn that sometimes you can get angry at someone, but it doesn't mean you don't love them anymore. Later on, Blue finds The Book of Love and skidoos into it. There, we find a tale about a prince and a princess who were in love. To keep track of things, we listen to the story and recall what happens, so that Blue can write it down. The story goes like this: a prince and a princess were in a love, but a magic spell turned the prince into a heart. He then floated up so high that the princess couldn't reach him and a strong wind started blowing him away. The princess followed the prince through a forest and up a mountain. She finally got close enough to reach him as a heart and hugged him, turning him back into a prince. The lesson of the story is that you should always follow your heart.

In Blue's Room, Blue takes the story of Cinderella out of the bookshelf and talks about it. She thinks that Cinderella is "so dreamy." Blue wonders if Cinderella got married to her Prince Charming, so Moona brings her into the playroom to talk about it. She says that the prince's name is Charlie and that they did get married. These days, she's making shoes that don't fall off, so people won't lose them like she lost her glass slipper. Not only that, she's a mother now - she shows a picture of her baby named Ella. Prince Charlie is home taking care of her. Blue asks about her stepsisters, saying the way they treated her wasn't very nice. Cinderella says that she had a talk with them and things are okay now. After Blue leaves the playroom, Joe shows us a Love Day card that he made us. In a segment following the show, Blue answers a question submitted online from Jose. He asks what her favorite musical instrument is, and she answers that it's the trumpet because she "loves the way it sounds." 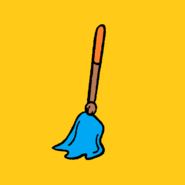 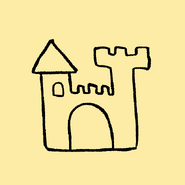 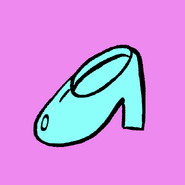 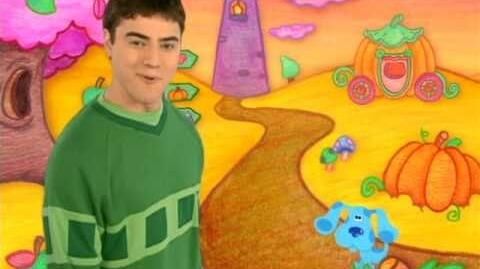