What does Blue want to look carefully at?

I Did That! (Broadcast/Production Order)
Blue's First Holiday (Credit Order)
Look Carefully... is the thirty-second episode of Blue's Clues from season 5.

Joe and Blue teach the viewers about observing things to learn more about them. For example, we look carefully at a duck to figure out what it's doing. They play a game called Mystery Box with Shovel, Pail, and Gopher. Later, we end up in a game show where observing things could earn us big prizes, or not.

Joe first greets the viewer by wanting to show what Blue and he found. What they found was a duck in their pond, and they wanted to look closer and more carefully at it to see what it was doing. Joe asks the viewer, "What do you think the duck is doing?" and then kids say, "Eating!" The duck was eating the plants underwater as its food. Then they wondered the question of the episode, "What can we look more carefully at?", which then transitions into We Are Gonna Play Blue's Clues. Then the Pawprint transforms into a duck after Joe says, "Remember, Blue's pawprint will be on the clues. Blue's Clues." The pawprint then moves away after Joe quacks at it. Then the Handy Dandy Notebook is mentioned, and Joe goes to Sidetable Drawer to get it. After Joe gets it, Sidetable then says his shirt matches his crayon. After that, Joe tells the viewer to look carefully, then go into the Play Blue's Clues song. Then he questions the viewer if they're ready to play Blue's Clues. Joe then sings We Are Looking for Blue's Clues. Joe says "Let's look carefully for clues" before viewers said there was a clue on a bug. Joe then goes outside and sees Shovel and Pail and they were playing "Gopher's Mystery Box" with Gopher. The viewers, Joe, Shovel, and Pail look carefully at what Gopher has in the box. The first round answer was then a carrot, and the second was Gopher himself. The viewers and Joe went to look carefully at more objects, including a bird's nest. The second clue was seen, and when the viewers said there was a clue, Joe asked were is the clue. The viewers said something, but Joe still can't see it. Then the viewers said on the wings, which then Joe found the second clue. It was on Baby Bird's wings. After writing the clue down, it was Mailtime. Mailbox has a letter for Joe to carefully at. The video letter was in a museum. After that, Blue and Joe skidoo at a game show titled "How Observant Are You?" First question was "What color shirt was the boy wearing?" The answer was a blue shirt. Second question was "What did the girl say when she saw the cookies?" The answer was "Yummy!" Third question was "Where did the girl hide last?" The answer is a tree. Blue and Joe got all the question correct and were the new champs. The last clue was then rumored. It then went away from the screen, and Joe asked where, and the viewers said behind him (however nothing was said at all). Joe found the last clue and it was on red with black spots. When Joe went back home, he went to think what does Blue want to look carefully at. And with our three clues, it was a ladybug. Joe and Blue went outside to go find the lady bug, with assistants from Shovel and Pail. The lady bug was on Blue's paw. Joe thanked the viewer for helping out, and the episode ends. 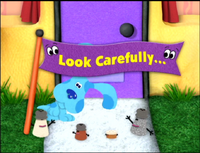 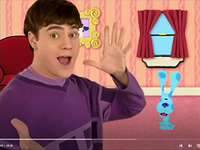 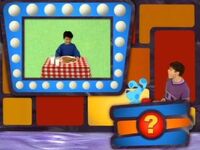 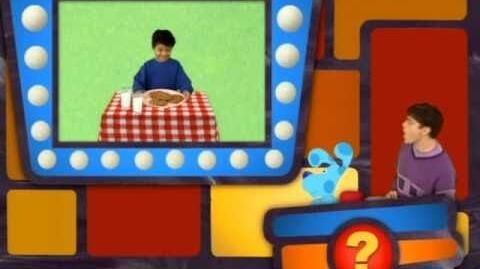