What dance does Blue want to make about?

A Pot
A Plate
Squiggly Lines

Steve and Blue explore all sorts of dances. They learn that all sorts of movements can qualify as a dance. In the Skidoo segment, they find out that a person who works to create dances is called a choreographer. The viewers help Steve and Blue to aid the Choreographer in performing a new dance of his.

Steve welcomes us in. He says that he's just put his shoes on and feels like moving in a certain way. He shows us and we identify it as jumping. We also twirl with Blue and do some wriggling. Steve suggests that we put it all together in a dance, so we try and have great fun. In this episode, we explore various styles of dance. After Steve makes a gelatin wobble, we try some wobbling too. We then hear Pail and go outside to find out what she's doing. She found a leaf and then made up a dance about it - Twirl and Hop. We also do the Shiver Bend Explode dance with Shovel, which he made up based on a dandelion. Finally, we do Periwinkle's Seed Pod Slide, which involves the moves slide, slide, pirouette and jump. In the Blue Skidoo segment, we meet up with a choreographer and help him out. He has a dance called "The Baby Lion and The Monkeys" that he wants Steve and Blue's help with. Steve plays one of the monkeys, trying to find Blue, playing the baby lion. He skips from rock to rock on a puddle of mud, following our lead. He then does a pirouette to open a door and a march through a tunnel. Finally, the dance ends when he slides gently behind a tree and tiptoes to the baby lion. 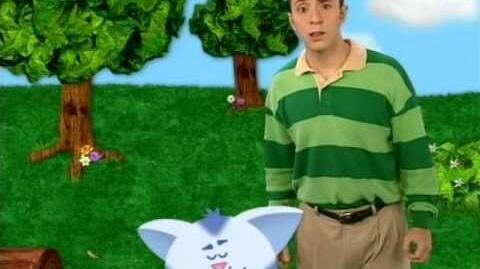