"My little sister was 4 at the time, so that would put me around 7 years old when I watched it with her, I still remember my Tita’s (aunt’s) pink rug, because she was the only one with cable. So, we’d go over her house, switch the channel to Nickelodeon, and watch ‘Blue’s Clues’ with my cousin Gabby".

Joshua "Josh" Craig Dela Cruz (born on March 23, 1989) is a Filipino-American actor, dancer, musician, and singer. He plays a fictional version of himself as the host in Blue's Clues & You!. He is the third main host of the franchise, after Steve Burns and Donovan Patton, which are his cousins in the series.

Joshua was born in Dubai in the United Arab Emirates. His parents were Filipino immigrants of Bicolano and Ilocano descent. Although he and his family has lived in the UAE and moved to Manila in the Philippines at some point, they eventually moved to the United States, where Joshua began a career in Broadway.

He had worked in theater for over a decade and now is currently working on film, television, music, and photography. He was previously seen as Aladdin in the Broadway production of Disney's Aladdin. However, in 2018, he quit Broadway because of his taping commitments in Blue's Clues & You! and the upcoming Blues Clues movie in 2022. Josh Has A Wife Name Amanda He Married in 2016. 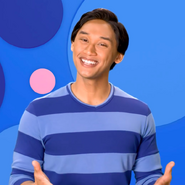 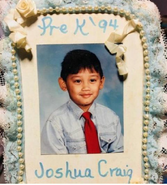 Josh Dela Cruz on Playing the Iconic Leading Role in "Blue's Clues & You!"

“Blues Clues & You!” host Josh Dela Cruz on why it’s important to celebrate being Filipino