What does Joe want to show at show and tell?

Feet
A Feather
A Sound (Quack)

Joe Gets a Clue
Joe's First Day (alternatively known as Joe and Tell) is the 23rd episode of Blue's Clues from season 4.

Steve's younger brother, Joe, is coming over to have Show and Tell with Blue and their friends.

Steve welcomes us in, saying that we're having show and tell today. He's trying to figure out what he could show at show and tell. He considers his stuffed anteater, Horace and his guitar. Just then, we get a phone call. It's Steve's brother, Joe. Joe is coming over to the Blue's Clues house and show and tell is one of his favorite things. In this episode, we have fun doing show and tell with the various characters and getting ready for Joe to come over. Sidetable shows us that she has a soft, yellow feather that she's going to show at show and tell. Steve finds a picture of Joe that he's been working and decides that we can show it to Joe during show and tell. He drew the picture in the park and wants us to help him finish it. He adds in a picture of himself reading a book and then realizes that Joe is barefoot. So we select some appropriate shoes for being in the park - sneakers. We find Blue, who has a book about her turtle Turquoise that she wants to show during Show and Tell. She sneezes and the book falls apart. We help her to put the book back together by putting the pages in order. In the beginning of the book, Blue puts food in Turquoise's dish. Next, Turquoise eats the food. In the final page, Turquoise is finished and her dish is empty. Next, we find Slippery, who made a book about brushing his teeth. We help out once again to get the pages in the correct order. Finally, we add something else to the picture of Joe, a slide. 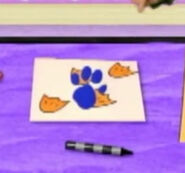 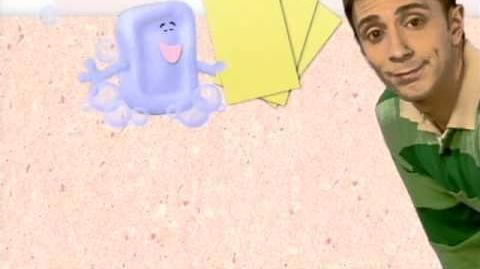