What did Blue invent?

A Notebook
The Thinking Chair
Pawprints

Steve and Blue look at many inventions.

Steve came up with a device to use to change the channel on the television without getting up, but when he realizes that there's already such a thing, it spurs him to try and create a unique invention following the slogan of try again. When he asked Blue if she invented something, she replied that she did, and they play Blue's Clues to figure out what that invention is. After getting his notebook from Sidetable Drawer, Steve is told by a viewer that a clue has been spotted. He mentioned that it was Sidetable Drawer, but the viewer tells him that Blue's pawprint actually appeared on Steve's notebook. Steve confirms that this was the first clue, so he draws it in his notebook. Immediately after the first clue, Steve meets up with Mr. Salt and Mrs. Pepper, who want to eat peanut butter and jelly on bread together. Steve's excited at his solution: the peanut butter and jelly sandwich, only to realize that it already exists. Then they come across Shovel and Pail and play an invention game. We take a look at pictures of inventions and identify the order in which they were invented. After finding the second clue on the Thinking Chair, they skidoo into an invention factory, where they take a look at some famous inventions such as a train and a car. Before he skidooed back home, Steve found the third clue on a picture of pawprints. When they got home they find that the very game they were playing is the answer and that Blue invented it. So Steve decides to invent a Notebook holder. 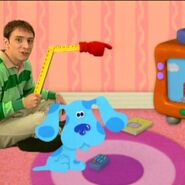 The first clue (Even before starting Blue's Clues)

How does Mailbox do that? 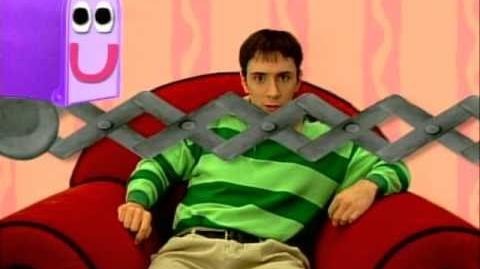