What does Blue want to make you do?

A Mouth
A Curved Line
A Sound (Hee Hee Hee)

Animals in Our House? (Broadcast/Production Order)
Blue's Big Car Trip (Credit Order)
I Did That! is the thirty-third episode of Blue's Clues from season 5.

Joe and Blue teach the viewers about who did what and how to make people feel good.

This episode is all about actions and results. we learn that by doing certain things, we can cause things to happen or make people feel a certain way. For example, Tickety makes Shovel mad/angry when she knocks over his block tower and we find a way to help her out. After mail time, Joe nearly tripped over a stuffed zebra, but then he put it back. We skidoo to Blue's school, where we explore sharing and taking turns.

Frame is now a boy top of the mountain.

Mailbox & Joe with a yellow letter. 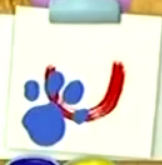 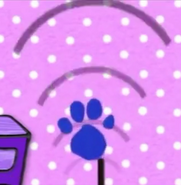 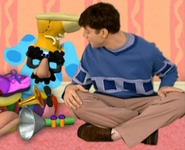 3 Clues From I Did That! 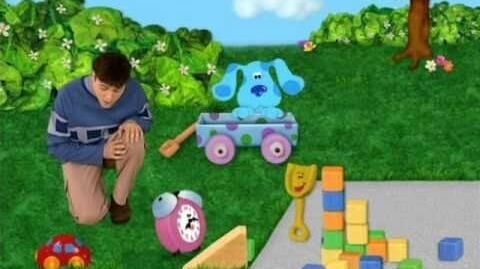