What does Blue want for her birthday present?

"Happy Birthday Blue" is the eleventh episode of Season 1 in the reboot series Blue's Clues & You!. It is a remake of "Blue's Birthday."

In this episode, Blue celebrated her birthday party.

Josh welcomes the viewers and says that they are the first guests for Blue's birthday party. He says that the viewers are early and, since they are, he wants to ask for help in getting things ready for the party and playing Blue's Clues to find out what Blue wants for her birthday. They agree and help out with the special dance for Blue. Sidetable Drawer was so excited for Blue's Birthday Party. As Sidetable Drawer opens up her drawer, confetti sprinkles out. Josh had a birthday notebook for a birthday game of Blue's Clues. Josh explains how to play Blue's Clues to the viewers. Soon after, Josh heads into the kitchen. He spots some cupcakes with blue frosting and sprinkles that Mr. Salt and Mrs. Pepper just made. But, one of the cupcakes had no sprinkles. "Forgotten sprinkles," they both say. "Where?" they both ask. They find out which cupcake needed sprinkles. Mr. Salt and Mrs. Pepper are so excited for Blue's Birthday and so is Josh. Josh heads outside and sees the backyard decorated. Josh comes across an invitation on the path. Later, they find the first clue, which is the color green. Josh gets out his notebook. But because this was a colored clue, he needed a green crayon. Josh draws the first clue. But he needed two more clues. Soon after, Josh helps out by fixing more things that are out of place. They complete a set of balloons that was missing one and place a missing napkin on a table. Josh then skidoos alone to Joe's present store and picks out gifts for Blue, Josh and Joe finds the second clue, a tank. So far, Josh had two clues, the color green and a tank. Josh buys Blue a stuffed rainbow puppy and Joe puts it in the present box. Josh skidoos home and in the mailtime segment, Blue gets a Birthday Letter from lots of celebrities wishing Blue a happy birthday. There was Samantha Bee, Rachel Dratch, Laurie Hernandez, Alexa, Carlos PenaVega, Kal Penn and Pete Wentz. Then, many characters watch as Blue unwraps her presents, each of which match the personalities of the friend that gave them to her. Slippery Soap gave Blue a bottle of bubbles. Tickety Tock gave Blue a clock puzzle. The viewers gave Blue the rainbow puppy. A shell falls on the floor, which is the last clue. After the last clue, a shell, Josh goes inside to the thinking chair. Josh sits down in the thinking chair and tries to figure out what Blue wants for her birthday present. The clues were the color green, a tank, and a shell. Josh thinks that the answer is the color green in a tank with a shell as a hat, but instead Josh realizes that Blue wanted a turtle for her birthday. After figuring out Blue's Clues, Josh calls Joe from the present store, and Joe arrives hidden Present Package and Blue opens Josh's present and finds the pet turtle from the present store. Josh tells Blue it was a special green turtle with a blue spotted shell. Joe tells Blue that her name is Turquoise and Josh says "Happy Birthday Blue, I love you," as she licks Josh. Blue and her friends all head to the table, where the birthday cake is served. The cast sings the Birthday Song. Soon after, Blue, Joe, and Josh blow out the candles. Josh chuckles and then thanks the viewers. Joe and Josh sing the So Long Song and the episode ends. 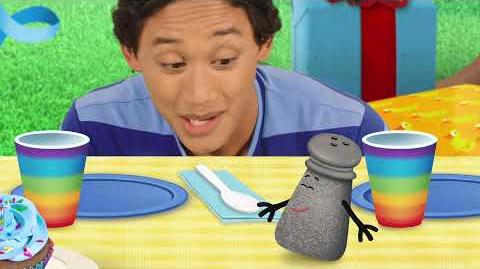