Blue's Clues Wiki
Register
Don't have an account?
Sign In
Advertisement
in: Characters, Other recurring characters, Animals,
and 12 more

Adam Peltzman
Green Puppy (or Green) is a minor recurring character in the series. She is one of Blue's preschool classmates, voiced by Adam Peltzman.

Green is one of Blue's friends currently attending preschool in the class of Miss Marigold. She is not able to speak but can manage to create sounds such as pants and barks. She is a puppy who loves to knock over block towers, as proven in Blue's Sad Day (which was the answer to Blue's Clues). Green is one of Blue's friends from school. She is friends with each one of her classmates. Green attends preschool in Miss Marigold's class, the only known class in the school building. Her best friends include Blue, Magenta, Purple Kangaroo, and Orange Kitten. Her favorite color is brown which is proven in "Blue Takes You to School."

Green looks just like Blue and Magenta, except for the fact that she is mint green with darker green spots and a dark green nose, and her ears are much smaller in design than Blue or Magenta's ears. She has a dark green nose and two white eyes with black pupils. Two small teeth are shown sticking out from inside her mouth, making her look similar to a bulldog.

Green has appeared in several episodes. Her first appearance was in Blue's Sad Day. She also appeared in the season 3 episode Blue's Big Holiday, Blue's Big Musical and the Season 4 episode Blocks. 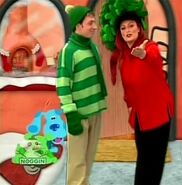 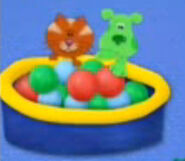 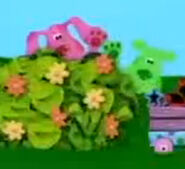 Green Puppy in the Notebook 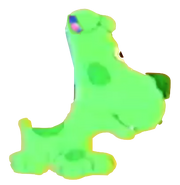 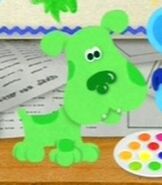