Mr. Salt and Mrs. Pepper Day (seen in photo only)

Veronica Shea
Grandma Cayenne is the maternal grandmother of Paprika and Cinnamon. She is also Mrs. Pepper's mother and the Mr. Salt's son-in-law. It is unknown where she lives, though she supposedly resides in a house near the home of Blue and Steve, considering the fact that she often visits her child, her son-in-law and her grandchildren at that house, meaning she can easily get to the Blue's Clues house quickly, therefore she lives near there. The character wears a pair of pinkish-purple glasses.

Grandma Cayenne is a cayenne shaker and the female grandparent of Paprika and Cinnamon. She, like her child Mrs. Pepper and her son-in-law Mr. Salt, is French. The character can cook many dishes and cares about her child and grandchildren. She apparently has never met Joe because she made her only appearance before he took over the role of Steve as host of Blue's Clues in the fifth season of the series.

Grandma Cayenne is a brown color. She wears pink glasses and has a white cap with five gray holes. The character has two black arms with one hand on each arm. There are three fingers on each of her hands. 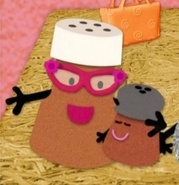 Add a photo to this gallery
Retrieved from "https://bluesclues.fandom.com/wiki/Grandma_Cayenne?oldid=118143"
Community content is available under CC-BY-SA unless otherwise noted.