Blue's Clues Wiki
Register
Don't have an account?
Sign In
Advertisement
in: Characters, Other recurring characters, Males,
and 2 more

Evan Espinoza
Jonathan Sturgess (reboot)
Gingerbread Boy is a gingerbread man who visits Steve and Blue every once and a while. He can be shy and mostly doesn't talk. He loves surprises, though.

Gingerbread Boy has appeared in several episodes. His first appearance was in "Blue Wants to Play a Game".

He appeared in the audience in "Blue's Big Musical".

He also appeared in the computer game "Blue's 123 Time Activities". In this game, all of his buttons are light brown, but in the beta, they were their usual colors. 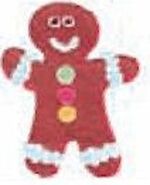 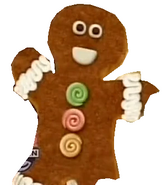 from Blue's Birthday
Community content is available under CC-BY-SA unless otherwise noted.
Advertisement