Ginger is one of Mr. Salt and Mrs. Pepper's newborn fraternal twins and a new resident of the Blue's Clues house. Ginger can't talk or walk yet. Ginger is usually wrapped in an orange blanket with light orange swirls. She and Sage like to swim in the kitchen sink, and they use doughnuts like inflatable floatie rings.

Ginger is a short, putty brown colored shaker with black arms and a light brown cork for a cap. She has stubby black arms, black eyes, and a red mouth.

She and Sage are the same size and shape, and they are the shortest out of the main characters.

Ginger debuts in Blue's Clues & You! in the third episode, "Big News with Blue." She is part of the Blue's Clues family from then onward. In many episodes of the reboot, Sage and Ginger play the roles that Paprika and Cinnamon had in the original series. 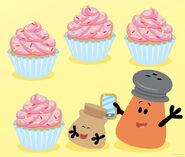 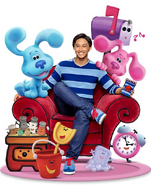 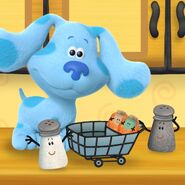