Cody Ross Pitts
Taylor McKelvie (The Grow Show!)
Dante Altobello
Freddy, also known as Fred (More common name in Blue's Clues & You!), is a felt boy and one of the Felt Friends. He lives in the Felt Frame located inside the Blue's Clues house with all the other felt friends. He often needs help deciding on what to do and where to put things.

Like all felt friends, Freddy has a circle head and a pair of rectangle arms and legs (all of which are gold), and a square body (which is orange) like most felt boys. He also has a pair of black eyes and a pink mouth.

Freddy has gold and orange square body wearing a birthday hat with a balloon.

Freddy has aquamarine and blue square body and wearing a purple party hat, and holding a balloon.

Freddy has aqua and magenta square body and wearing a purple party hat, and holding a balloon. 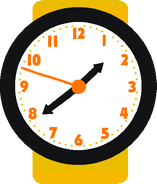