Fifi is a felt girl and one of the Felt Friends. She lives in the felt board located inside the Blue's Clues house with all the other felt friends. She often needs help making items out of felt shapes. She is the sister of Freddy, and seem to be the same age as him. She is renamed as Felicia in several video games as well as Blue's Clues & You! (although another felt friend of the same name appeared in the original)

﻿Fifi is an aquamarine felt girl with a purple triangle body. Her favorite pass times include building objects with felt shapes, exploring the picture frame she lives inside of, and attending parties. The character has one known relative, Freddy, her brother. Fifi is a good friend of Steve, Joe and Blue, though she and Freddy seem to have never met any other main character besides them, such as Mailbox, Sidetable Drawer, Slippery Soap and Tickety Tock.

Like all felt friends, Fifi has a circle head and a pair of rectangle arms and legs (all of which are aquamarine), and a triangle body (which is purple) like most felt girls. She also has a pair of black eyes and a red mouth.

In Blue's Clues & You!, her head and limbs are green. 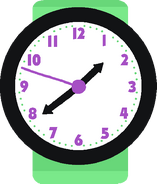 Add a photo to this gallery
Retrieved from "https://bluesclues.fandom.com/wiki/Fifi?oldid=150155"
Community content is available under CC-BY-SA unless otherwise noted.